Society of American Travel Writers Monument at the Casements in Ormond Beach, FL

On November 14, 1956, Florida Governor Leroy Collins welcomed the National Association of Travel Organizations at the Ellinor Village Country Club. It was there that morning on which the National Association of Travel Writers was organized. The NATW adopted bylaws, a constitution, and elected officers. Peter Celhers was elected as the first president.

The groups met with sessions such as “A Guided Tour of Florida,” “How to Sell Travel,” and more.

Now known as the Society of American Travel Writers, the national group has over 1,000 total members. SATW members are classified into one of four geographic areas and also assigned one of three councils based upon profession.

SATW operates upon a published set of core values including ethical standards, diversity, respect for individuals, respect for culture, and sustainability.

In June 1999 the Central States chapter of SATW met in Daytona Beach, welcomed by a $55,000 incentive package from the Daytona Beach Area Convention & Visitors Bureau. An additional $30,000 worth of promotional goods and services were donated by local businesses.

The DBACVB considered funding the visit of sixty travel writers a wise investment based upon the potential publicity in magazines, newspapers, and books. (Remember, the internet and social media had not blown up in the manner they have today.) Susan McClain, the communications director for the bureau stated, “The main message we’re presenting is that we are rejuvenating Daytona Beach and we want to attract more families.”

The more things change, the more they stay the same.

The visitors were treated to tours of facilities such as Museum of Arts and Sciences, Jackie Robinson Ballpark, Ocean Walk (at the time under construction), LPGA golf courses, and other tourist friendly sites.

One visit of interest was a return to the Ellinor Village site where the organization had been formed forty-three years prior. To commemorate both the formation of the organization and the recent visit, SATW was able to install a small bronze on coquina plaque on the grounds of The Casements in Ormond Beach. The plaque reads 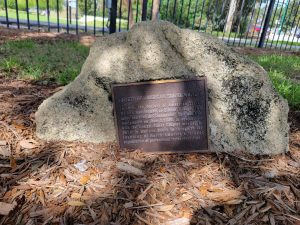 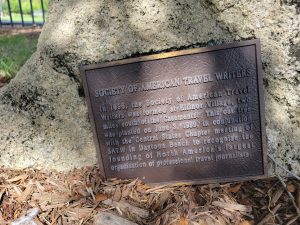 In 1956, the Society of American Travel

Writers was formed at Ellinor Village,

two miles south of the Casements. This oak tree

with the Central States Chapter meeting of

SATW in Daytona Beach to recognize the