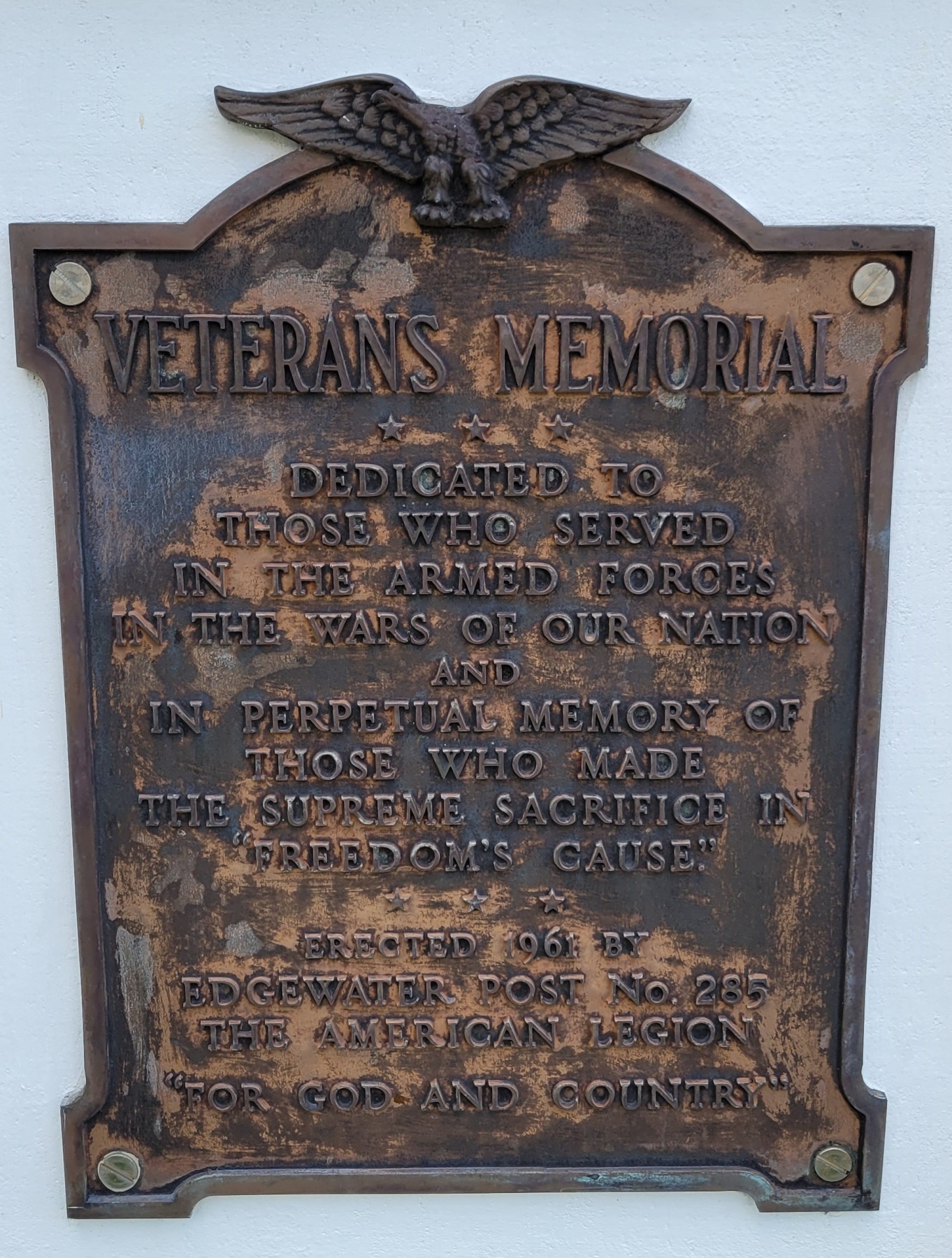 Veterans Park in Edgewater, Florida is a small park located just off Riverside Drive with the
beautiful Indian River on the eastern edge. The small park contains two monuments with plaques
along with retired military equipment that is in stark contrast to the peaceful neighborhood the
park belongs to.

The older monument dates to 1961 and was originally placed on the grounds of the Community Center. The large brick monument contains a smaller bronze plaque reading “Dedicated to those who served in the armed forces in the wars of our nation and in perpetual memory of those who made the supreme sacrifice in freedom’s cause.”

The dedication ceremony, held by Edgewater American Legion Post 285, was described in a local paper as “impressive” and featured many local dignitaries. The program began with the advance of the color guard and the singing of the National Anthem by Virginia Henderson. Mrs. Edward Price accompanied Ms. Henderson. Cliff Mosher, past commander of the local Legion post served as master of ceremonies.

Other speakers that day included Judge Robert Wingfield, from DeLand, who gave the principal address; William M. Edwards, commander of the Fifth Legion District provided the dedication address. Commander William Cairnie presented the monument to the City of Edgewater with Mayor Aquilla Hussey and other city officials accepting the gift.

The most moving part of the dedication was no doubt the laying of a wreath honoring those who
have passed in service to the United States by Gold Star Mothers. One of the participants was
Ms. Myrtle I. Cole, whose son James Lee Cole was killed in World War II. Mr. Cole is buried at
the Netherlands American Cemetery. Other Gold Star Mothers attending the ceremony were
Mrs. Thomas Callanan and Mrs. Otto Hovarter.

The Reverend Richard Alexander, of Union Church closed the ceremony with the benediction.

In 1988, a second monument was added to the park. The tone of the dedication event was decidedly more aggressive with retired Lt. Col. John Bolt as the featured speaker. Bolt was a member of the famous Black Sheep squadron in World War II and was a jet fighter ace during the Korean War. Bolt was the only Marine Corps pilot to record five kills in both propeller driven and jet aircraft. He was also one of only seven aces in the two wars. To be an ace a pilot had to shoot down at least five enemy aircraft in midair combat.

To learn more about the Black Sheep Squadron I recommend the book Once They Were Eagles. You might also consider the television series Baa Baa Black Sheep.

Bolt provided a speech heavy in pro-American rhetoric that many might find appropriate on Veterans Day. He expressed the view that America needed to be strong in order to keep the peace, “Unless you are capable of defending your territory, defending your ideals, someone is simply going to push you off it.” He believed that this strength is what brought the Soviets into discussions resulting in the SALT II treaty of 1979. “The desire for peace is not enough. Peace comes through strength. The veterans we honor here today had strength.”

Gold Star Mothers member Mary Biatek gave another speech. Ms. Biatek spoke on the danger of drugs to our country stating, “This country can be defeated, not on the battlefields, but by decay within.”

Rick Weeks, who at the time served as Commander of the Indian River Post 145 of the Disabled American Veterans gave a talk more focused on veterans. He compared the most current veterans to those who served under George Washington. The one thing that remained constant was the pride of veterans.

I would like to express my thanks to Linda Hulvershorn, archivist at the Sheldon Research
Library located at the New Smyrna Museum of History, for her assistance in finding local reports
of these events.

If you are interested in war memorials in Volusia County, Florida, I invite you to take a look at my post discussing the World War I memorial in Osteen.  This monument located just off busy Highway 415 recognizes the service and sacrifice of some of the men from the area who served during the War to End All Wars.