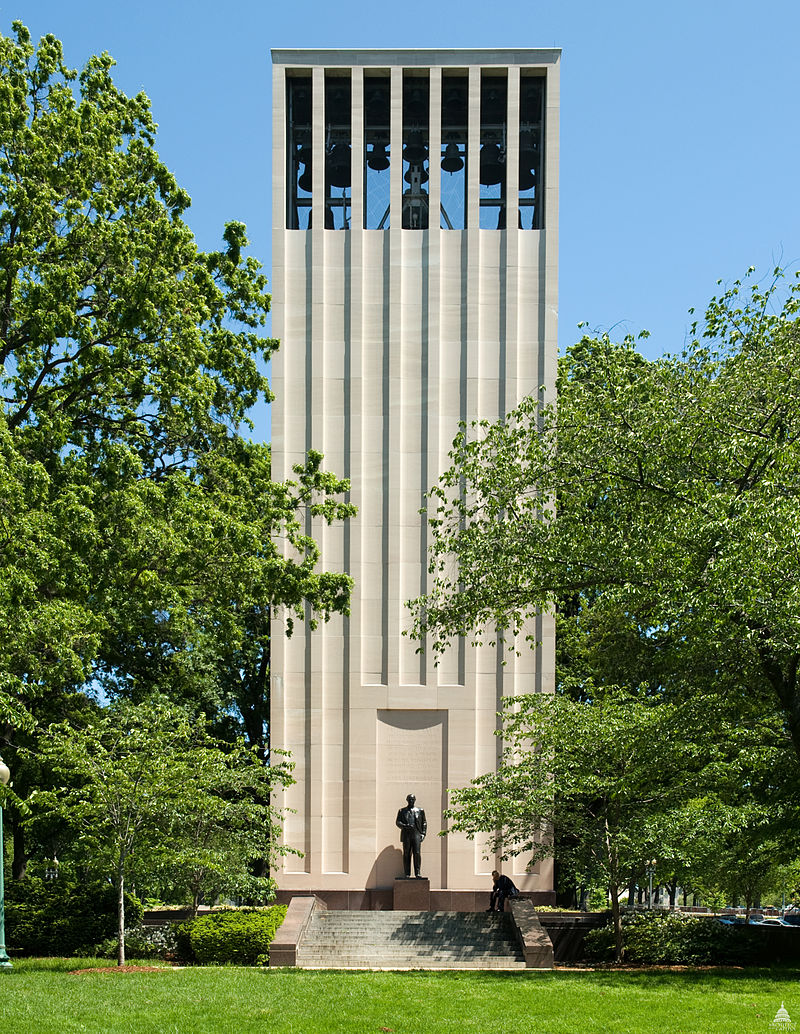 Senator Robert A. Taft, the son of President and Supreme Court Chief Justice William Howard Taft, served the residents of Ohio in the United States Senate from 1939 until his death in 1953. Taft was a staunch conservative, helping bring together Republicans and conservative Democrats in a bid to prevent expansion of President Roosevelt’s New Deal initiatives.

One of Taft’s lasting legacies is the sponsorship of the Taft-Hartley Act of 1947, which ultimately led to the creation of the misnamed “right to work” policies that have ultimately been pro-business and anti-labor.

In multiple elections Taft sought the Republican nomination for the presidency only to be defeated each time by the likes of Dwight Eisenhower, Wendell Wilkie, and Thomas Dewey.

On April 14, 1959 more than 5,000 people attended a dedication ceremony for the Taft Memorial on Constitution Avenue between New Jersey Avenue and First Street, N.W., only a block from the Capitol Building. The memorial was originally authorized in 1955 and was created by artist Douglas W. Orr. It features a fifteen foot base with a ten foot tall statue of Taft, sculpted by Wheeler Williams, that is topped with a 100-foot bell tower created out of Tennessee marble.

Inscribed in the marble above the Taft sculpture are the words, “This Memorial to Robert A. Taft presented by the people to the Congress of the United States stands as a tribute to the honesty, indomitable courage,, and high principles of free government symbolized by his life.” Speeches at the dedication were made by President Eisenhower, former President Herbert Hoover, and Richard Nixon.

According to the Architect of the Capitol, “The 27 bells in the upper part of the tower are among the
finest in the world and were cast in the Paccard Bell Foundry in Annecy, France. The largest, or
bourdon bell, weighs 7 tons. The bells are well matched and produce rich, resonant tones.” The bells
are struck on the hour and sound on the quarter hour. The bells are set to ring automatically but can
be played manually as well.

To learn more about Senator Robert A. Taft, you may wish to find this book:

The Political Principles of Robert A. Taft written by Russell Kirk.

Robert A. Taft has been neglected by some historians and political theorists and vilified by others. Vigorously and impartially written, this book analyzes the ideas and influence of a great U.S. senator of the twentieth century. Here readers will find a close and lively examination of Taft’s convictions on freedom, justice, labor policy, social reform, foreign affairs, and the responsibilities of political parties.

This post may contain affiliate links. If you click these links and make a purchase, I may receive a small
commission. This commission does not affect any price that you pay. All views and opinions provided are
my own and are never influenced by affiliate programs or sponsors providing products.