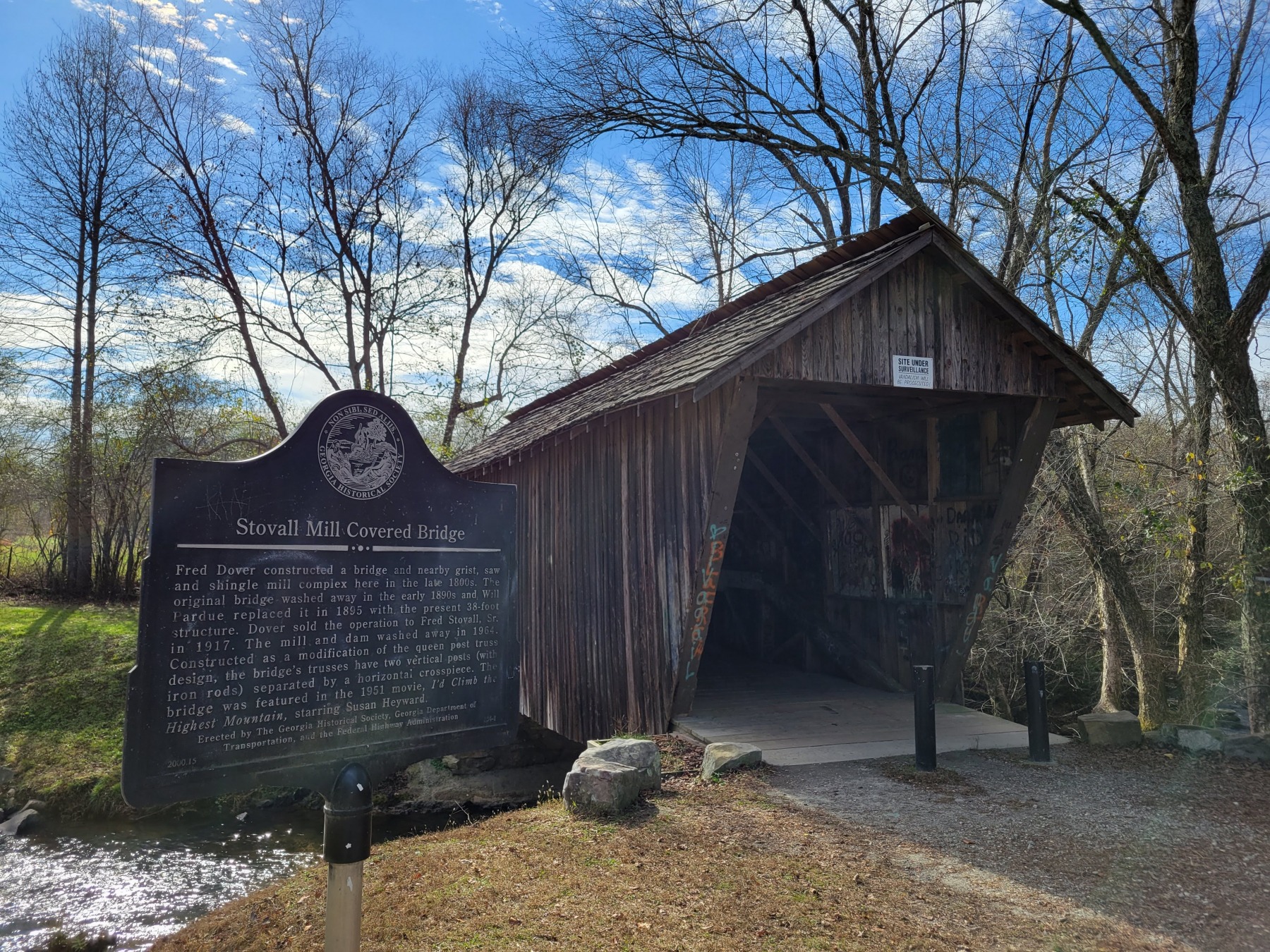 Located off of Georgia Highway 255 in Sautee Nacoochee, GA is the 38-foot-long Stovall Mill Covered Bridge. The graffiti covered bridge dates to before the turn of the 20th century. As would be expected, parking is free and there is no admission charge to view or walk across the bridge. Picnic tables are on site so you can enjoy the views and sounds of Chickamauga Creek.

Fred Dover constructed a bridge and nearby grist, saw and shingle mill complex here in the late 1800s. The original bridge washed away in the early 1890s and Will Pardue replaced it in 1895 with the present 38-foot structure. Dover sold the operation to Fred Stovall, Sr. in 1917. The mill and dam washed away in 1964. Constructed as a modification of the queen post truss design, the bridge’s trusses have two vertical posts (with iron rods) separated by a horizontal crosspiece. The bridge was featured in the movie I’d Climb the Highest Mountain  starring Susan Heyward.

Erected by the Georgia Historical Society, Georgia Department of Transportation and the Federal Highway Administration.

For those with more interest in the subject, I recommend the book Vanishing Landmarks of Georgia: Grist Mills and Covered Bridges written by Joseph Kovarik. Vanishing Landmarks of Georgia spotlights 56 remaining gristmills and 16 covered bridges. In addition to stunning color photographs of each structure, the guide provides a history of the site and detailed directions, including maps and GPS coordinates.

I’d Climb the Highest Mountain, starring Susan Hayward and William Lundigan is available on DVD. This simple story directed by Henry King, follows a Methodist minister called to a rural Georgia mountain community. There he and his city-bred wife use their love to help a small town find God. The film has limited reviews on Rotten Tomatoes. 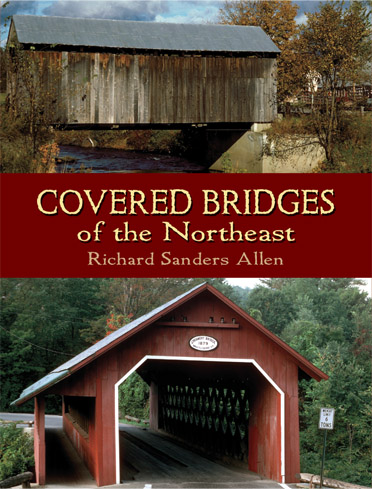 Covered Bridges of the Northeast

In Covered Bridges of the Northeast, author Richard Sanders  Allen describes foot bridges, latticework, and double-decked structures, double-barreled bridges, drawbridges, and more, in locations from Maine to New Jersey. Enhanced with 150 illustrations, diagrams, and maps, the text provides complete information on bridge location, length of span, and other data. A priceless tribute to bygone days, this profusely illustrated and delightfully written book will captivate lovers of Americana and anyone interested in bridge construction. 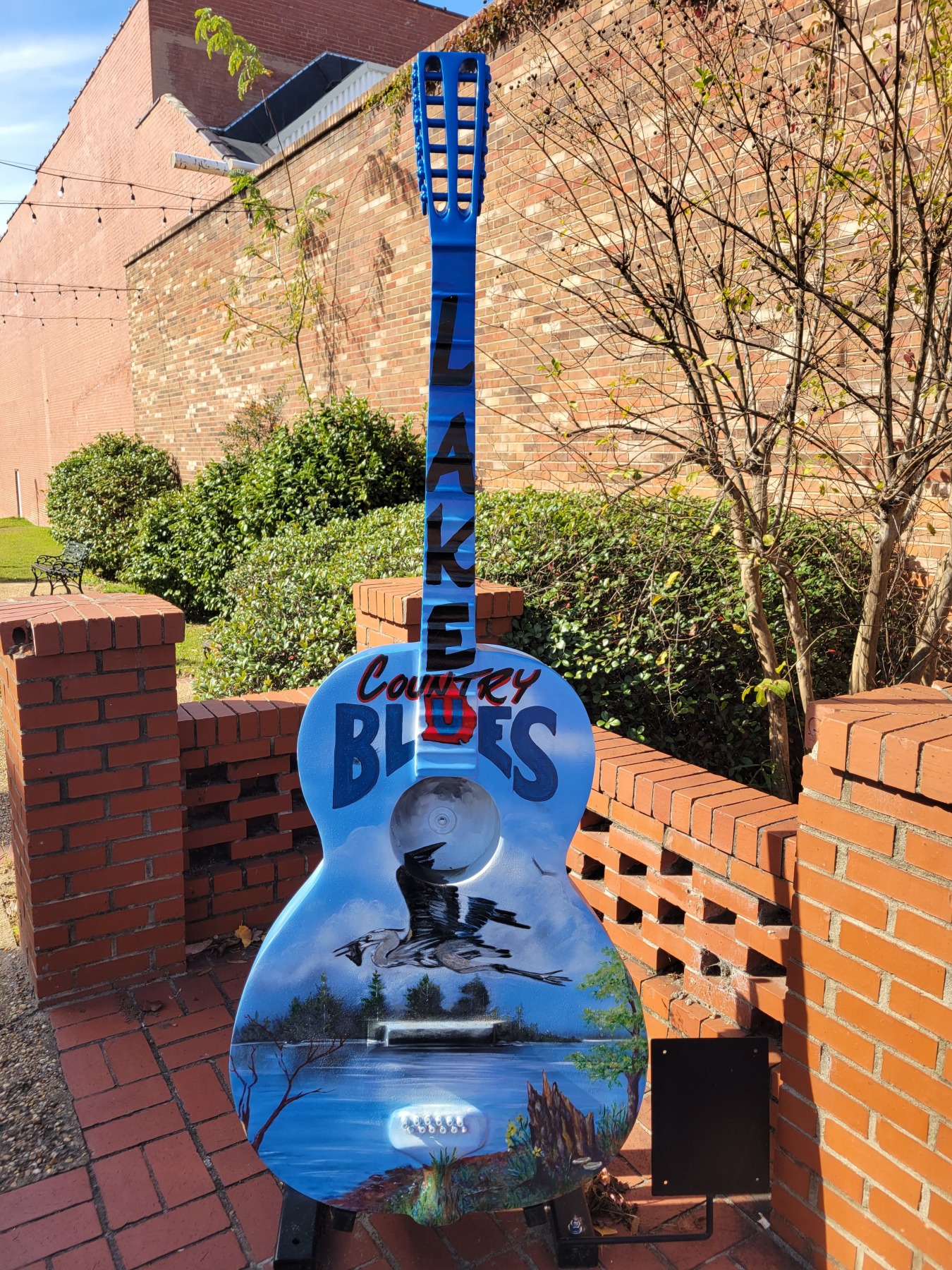 William Samuel McTier (McTear) was born in Thomson, Georgia on May 5, 1898, though some researchers contend that he was born in 1903, and his headstone gives the year of 1901. I have yet to find a source on how he became known as McTell. It is also unclear if young Willie was born blind or lost his sight during childhood. The New Georgia Encyclopedia indicates McTell attended schools for the blind in Georgia, New York, and Michigan.

While in his teens, McTell and his mother moved to Statesboro, GA, and it was here where Willie learned to play the six-string guitar.

By the 1920s, McTell had left the family home, taking to the road as a traveling musician, playing carnivals, bars, parties, churches, and street corners to earn a living.

Young and talented, McTell became popular in Atlanta, regularly playing at house parties and similar events. By this time, he had upped his game to the twelve-string guitar, an instrument that helped him project his music better in the crowded areas he often played.

By 1927, recording companies had noticed McTell and other blues musicians and he cut his first tracks for Victor Records, following that with a 1928 session for Columbia. The New Georgia Encyclopedia lists multiple studios that McTell recorded for, often under different names. Musicians of the era would often record under similar, but different, names in order to avoid contract conflicts.

McTell was wed to Ruth Kate Williams in 1934. They were to later record several tracks together.

Commercially, McTell’s sales were declining during the 40s, and he found himself playing more on the streets. He did record for Atlantic Records in 1949 and Regal Records the same year. His final known recordings were made in 1956 by Atlanta record store owner Edward Rhodes.

Starting in 1957, McTell served as the preacher at Mount Zion Baptist Church in Atlanta and devoted himself to religious music. Blind Willie was to only live a short time longer and passed away on August 19, 1959, due to a cerebral hemorrhage. McTell is buried in Jones Grove Baptist Church Cemetery in Thomson, Georgia.

Located in the downtown Thomson, GA area is a public art exhibit titled McTell’s 12-String Strut, honoring the locally born Blind Willie McTell. There are twelve, seven-foot-tall Stella guitars in the installation, each painted by a different artist. The guitar models were created by Icon Poly Studio and are made of polyurethane.

The installation was presented to the public in 2016 after a Georgia Department of Economic Development report suggested a public art component and providing additional exposure for one of McDuffie Counties most recognized citizens as part of the county’s tourism marketing efforts.

Below, find images of 6 of the 12 guitars that are located throughout Thomson. 11 of these are very easy to find. The 12th however took a bit more digging. It is located outside the McDuffie County Government complex.

The Blues Hall of Fame inducted Blind Willie in 1981 and in 1990, the Georgia Music Hall of Fame bestowed the same honor.

In 1993, a Georgia Historic Marker was unveiled in Thomson, GA,, near the old railroad station, honoring McTell and his legacy. The text (including a few small grammatical errors) reads as follows

Willie Samuel McTear (1901-1959) was born between Big and Little Briar Creeks in the Happy Valley Community. In 1911, he and his mother moved to Statesboro, where he began his life of traveling and performing. Although blind from infancy, Willie developed a lifelong independence based on his acute sense of hearing., remarkable memory and versatile musical genius.

His blues feature his trademark twelve-string guitar played in rapid and intricate patterns of jagged, shifting rhythms accompanying his clear tenor voice. He started recording in 1927 for RCA Victor Atlantic and the Library of Congress. He last recorded in 1956 and returned to McDuffie County shortly before his death and is buried in the Jones Grove Cemetery. Blind Willie was inducted into the Georgia Music Hall of Fame in 1990.

McTell has also played a considerable influence on musicians after him. Performers as diverse as Taj Mahal, the Allman Brothers Band, Ry Cooder, Jack White, and Bob Dylan have covered his songs or singled out the blind guitar player for his influence on their careers.

Do you want to learn to play 12-string guitar? Or maybe you are looking to upgrade your equipment. The unmistakable sound of a well-made 12-string guitar is perfect for solo gigs and band performances, especially when it was designed by the founder of influential U.S. punk band Rancid. Tim Armstrong’s Hellcat is based on the old Fender acoustic that was his go-to guitar for songwriting, and quickly became one of the best-selling Fender acoustic artist models ever. With the Tim Armstrong Hellcat-12, that same classic vibe is offered in a 12-string version that simply rocks. Whether it’s alt-folk tunes at the college coffeehouse or slamming punk with a band, the Hellcat-12 combines great acoustic tone with versatile onboard electronics and a satin body and neck finish for smooth playability, all at a surprisingly low cost.

The legacy of McTell is celebrated each year at the Blind Willie McTell Music Festival held in Thomson, GA. Ticket prices for the event seem quite reasonable. The lineup for 2022 included Jimmie Vaughn, the Texas Gentlemen, Joachim Cooder (son of the legendary Ry Cooder), and more. For more information on the festival check their website.

The Rough Guide to Blind Willie McTell is an excellent introduction to the genius that poured from his fingers. It contains 25 key tracks including some of his best known such as Statesboro Blues. Little of the life of McTell is really known and there is no full length biography. To learn more about southern blues I recommend a copy of Red River Blues: The Blues Tradition in the Southeast. Drawing on archives and interviews with musicians, Red River Blues remains an acclaimed work of blues scholarship. Bruce Bastin traces the origins of the music to the turn of the twentieth century, when African Americans rejected slave songs, work songs, and minstrel music in favor of a potent new vehicle for secular musical expression. Bastin looks at the blues’ early emerging popularity and its spread via the Great Migration, delves into a wealth of field recordings, and looks at the careers of Brownie McGhee, Blind Boy Fuller, Curly Weaver, Sonny Terry, and many other foundational artists. 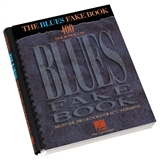 The Blues Fake Book
from: The Music Stand