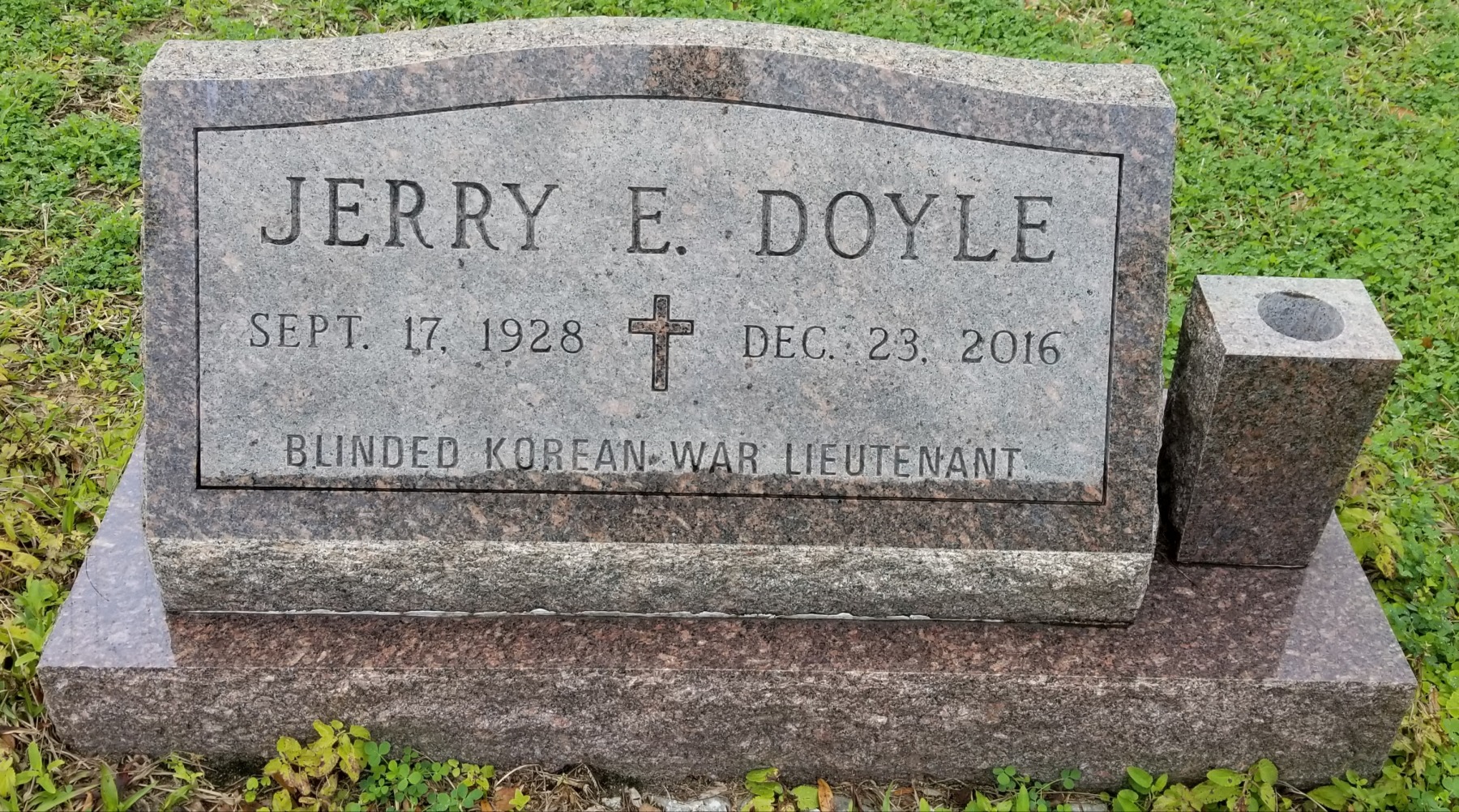 Any person who walks cemeteries for any length of time can tell you about
interesting finds. These finds do not always occur in the old sections or in
cemeteries deemed “historic.” The headstone of Jerry Doyle is certainly one of
those that demanded a look into the man’s life.

Jerry Doyle was born on September 17, 1928 to parents James V. and Nora C.
Doyle in the town of DeLand, Florida. He was the fourth of what would be ten
children. At the time, DeLand was home to around 5,000 residents.

Doyle attended local schools and graduated from DeLand High School in 1946, the
same year he registered for the draft. His 1946 draft card states he stood 5’ 8” and
weighed 135 pounds with brown hair, blue eyes, and a ruddy complexion.

Young Doyle was to attend classes at the University of Florida before receiving his
call to active duty with the rank of First Lieutenant, serving in the 40th Infantry
Division.

Sunshine Division, for much of the Korean War. The troops of the 40th were deployed to Japan in the spring of 1951 for training. In January 1952, the 40th relieved the men of the 24th Infantry Division. They were to serve during the hard fighting at Heartbreak Ridge and at the “Punchbowl” as the war came to an armistice in 1953.

Doyle served faithfully during the war. He was wounded severely in January 1953, during action around the “Punchbowl” when the jeep he was riding in was struck by enemy fire. Lt. Doyle lost his right eye, received a penetrating wound of the brain and a compound fracture of the skull because of the attack. A newspaper report of the time stated that in his present condition, Doyle was satisfactory. It was uncertain how long he would need to remain hospitalized and that he would be removed from his Tokyo hospital room to a facility in the United States as soon as practicable.

Doyle received the Purple Hear in recognition of his injuries.

The seriousness of his injuries led to a prolonged period of recovery. In mid February 1953, the army transferred Doyle back to the United States and he received further treatment at the Travis Air Base Hospital in Fairfield, CA. Later that year he was still hospitalized, receiving a short-term release from the VA Hospital in Hines, IL in order to visit his parents over the holidays.

In what must have been a proud moment, On June 1, 1954, James V. Doyle was
able to initiate his son Jerry into the Veterans of Foreign War, in a meeting held at
the Knights of Pythias Hall.

Despite his injuries, Jerry Doyle was to live a long and productive life. His
obituary touted his work with the American Legion, his love of family, and the joy he took in listening to University of Florida football games. In his obituary, Jerry is remembered as expressing no regret over his service or resulting blindness. Military service was what he had to do at the time.