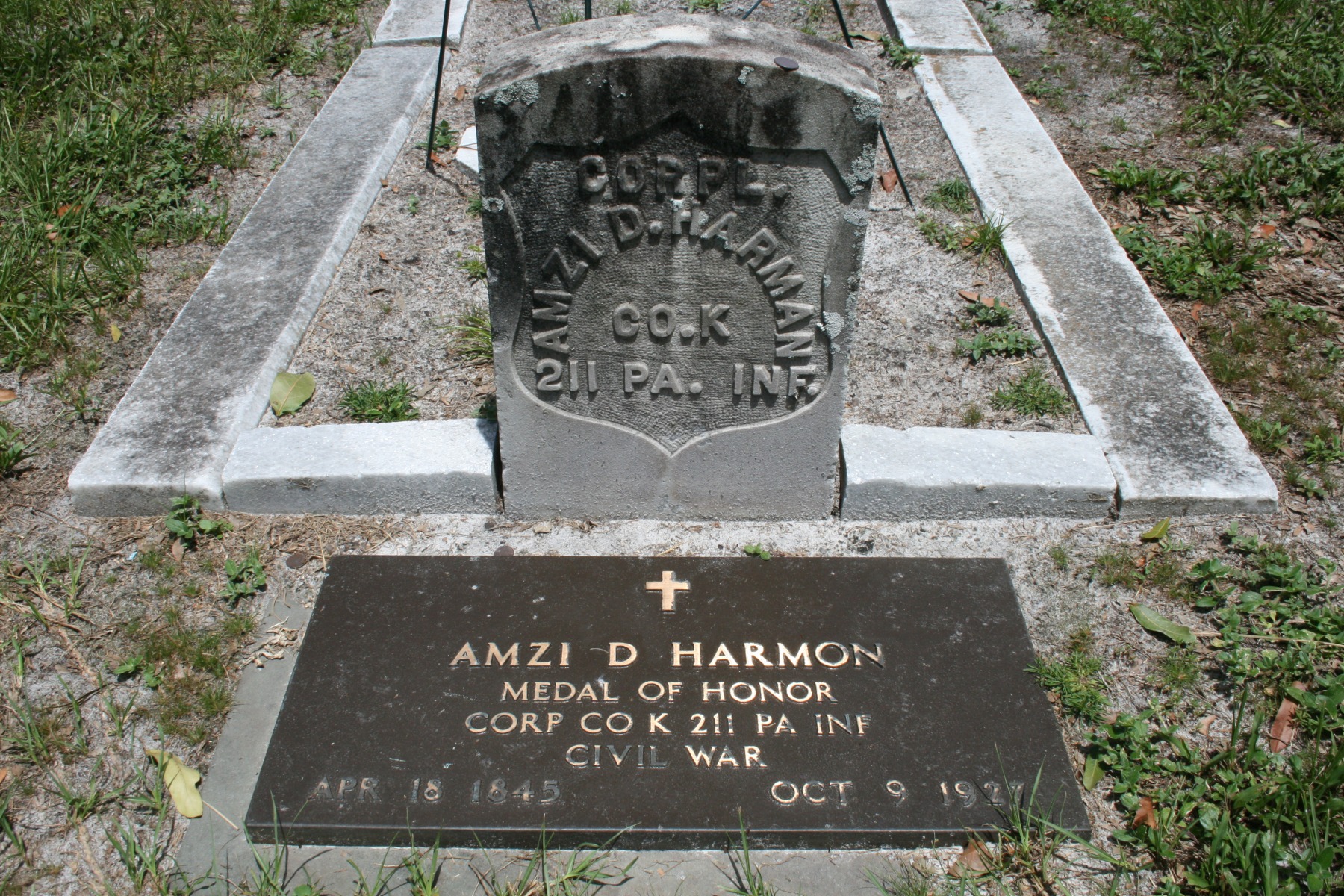 A couple of years ago while wandering Mt. Peace Cemetery in Kissimmee, Florida, searching for the graves of my grandmother and grandfather; I came across the final resting spot of Amzi D. Harmon. The burial itself was rather unremarkable. In fact, I might not have even noticed it if not for the traditional Union soldier shape of the headstone.

Harmon received his Medal of Honor for actions in April 1865, while serving as a
Corporal in Company K of the 211th Pennsylvania at the Battle of Petersburg in
Virginia. His citation reads simply “Capture of Flag.”

The 211th PA was a regiment raised late in the war out of western Pennsylvania. Many of those enlisting had already served prior enlistments. Company K was raised primarily from Westmoreland County.In late 1864, the 211th were transferred to the 3rd Division of the IX Corps, serving under Brigadier General John F. Hartranft.

Those wishing to learn more about General Hartranft are directed to this biography.

The regiment later saw action during the breakthrough at Petersburg under the
command of Lieutenant Colonel Levi A. Dodd. During the fighting, the regiment
was to suffer 135 casualties including 21 men killed. Harmon was singled out in an
after action report by General Hartranft for his efforts and having secured the flag
of the 45th North Carolina during battle. (1) General Hartranft submitted Harmon’s
name for Medal of Honor consideration. (2)

Corporal Harmon was born April 18, 1845 in Allegheny County, Pennsylvania.
After the war, he and dozens of other former Union soldiers moved to the
developing community of St. Cloud. Harmon arrived in Florida sometime between 1910 and 1920. In 1921, Harmon was named an honorary pall-bearer at the burial of the Unknown Soldier at Arlington National Cemetery. (4) Harmon lived in Florida until his death on October 9, 1927.

The story of Harmon’s headstone becomes a bit convoluted using Orlando Sentinel
newspaper articles. In 1995, Geoff Clark wrote that a man from New York brought
a marker noting Harmon’s honor (I assume this to be the bronze marker now on the
grave). The article goes on to state the New Yorker left town with the stone marker which ended up in a private museum in Tennessee. In 1996, Sentinel writer Jovida Fletcher states that the marker had been stolen, but was recovered from this again unnamed Tennessee private museum. (3)

No matter stolen or given, the returned headstone was rededicated in a ceremony held in
1995. I attempted to contact City of St. Cloud employees regarding participation of
the city Historic Preservation Board in this rededication but did not receive a reply.
Mt. Peace Cemetery in St. Cloud was founded in 1911 on a ten-acre tract deeded
by the Seminole Land and Investment Company. A Women’s Auxiliary was
formed with a stated goal “to aid in the work of improving and beautifying the
cemetery.” (5)

Today, Mt. Peace Cemetery is cared for by the City of St. Cloud. It is the final
resting place for more than 6,500 persons.

To the best of my knowledge there is no regimental history of the 211th Pennsylvania.