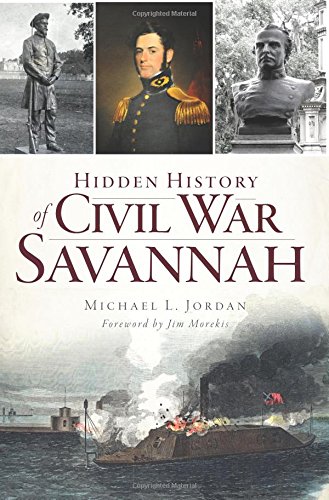 As author Michael L. Jordan describes Savannah, Georgia, “…Savannah is a Civil
War city, an epicenter of activity in the conflict that southerners like to call “the
War Between the States.” While I might take umbrage with this stereotyped
portrayal of southerners, there is considerable truth to this statement.

In his book, Hidden History of Civil War Savannah, Jordan tells nine stories
allowing readers an introductory, yet thorough enough for many readers, glimpse
of the role Savannah played during the Civil War. Savannah was more than just a
Christmas gift from General Sherman to President Lincoln.

The first chapter starts out with controversial Confederate Alexander Stephens and
his infamous “Corner-stone Speech” given in Savannah in March 1861. In this
speech Stevens leaves little doubt that slavery and white supremacy were the
drivers of the new Confederate government. He went further calling abolitionists
“fanatics” stating they “were attempting to make things equal which the Creator
had made unequal.” It appears that Stephens’s views were in the mainstream of
Georgia voters. Just twenty years later he served as Governor of the state.

In the following chapter Jordan treats us to the life of Francis Barton, a signer of
the Georgia Ordinance of Secession, who as a brigade commander in the
Oglethorpe Light Infantry was killed during the July 1861 Battle of Bull Run.
Bartow’s remains are interred in Laurel Grove Cemetery.

The life of Robert E. Lee and his strong associations with Savannah, especially his
time as a young engineer helping to construct Fort Pulaski are quickly covered.
The following chapter contains a thorough discussion of the CSS Atlanta and the
problems the ship’s crew faced before the vessel was eventually surrendered to
Union forces. The newly named USS Atlanta served in the Union navy during the
blockade of the James River.

The fate of Union prisoners of war in 1864 is a chapter that I enjoyed considerably.
It left me wanting more however. The next chapters cover the Confederate
evacuation of the city, including the arrival of General Sherman and concerns of
the local residents. The story of the capture of Savannah is followed by a
discussion of Savannah rejoining the Union. Again, the concerns of local residents
and businesses are discussed in detail.

While General Sherman didn’t put the torch to Savannah as he did to others, there
was a major fire in the city during January 1865. The fire is traced to a stable in the
northwestern part of the city. As the fire spread, it reached the naval arsenal
causing major explosions that rocked the city. Union forces helped in removing
shells when possible and in protecting citizens and property. The cause of the
blaze, and other small ones in the city, was not determined. Jordan does not put
forth an opinion or provide any evidence as to who may have been the cause.

This book is a quick and enjoyable read with each chapter standing on its own
merit. These brief vignettes provide an interesting background and introduction
into the role of Savannah before, during, and after the Civil War. The notes and
bibliography are appreciated and allow readers the ability to follow up and learn
more on subjects of interest to them.

This is not a travel guide. No maps, directions, or addresses are included. Rather, a
reader can use this as an introduction to places they may wish to seek out during a
visit to the “Hostess City of the South.”

A wonderful single day tour of the highlights of Civil War Savannah can be found
on the American Battlefield Trust webpage.

There are several guided walking tours of Civil War sites available. Savannah Walks
offers what looks to be an interesting tour readers might enjoy.

Some incredible Civil War era maps are available for viewing and download
through the Library of Congress.

You may read other reviews of Arcadia Publishing titles by clicking here.