Born January 20, 1945, in Clearwater, FL, Ingram joined the United States Navy at age eighteen. He received his training in California before being sent to Japan and then Vietnam as part of Company C, 1st Battalion, 7th Marines in July 1965.

In February 1966, Petty Officer Ingram and his company came under heavy fire. As Ingram sprinted toward the front to assist the wounded bullets punctured both of his canteens. Noticing a machine gunner had been injured, Ingram took up the post, manning the gun for the duration. For his bravery he received the Silver Star, the nation’s third highest military honor.

Just a month later, in the Quang Ngai Province, in South Vietnam, on March 28, 1966, Ingram’s platoon was attacked by more than one-hundred North Vietnamese soldiers who were pouring automatic rifle fire into the Americans.

Despite the barrage of fire, Ingram crawled along the ground to reach a wounded service member and supplied aid. Here he was shot through the hand. Ingram continued to aid wounded men, receiving two more gunshot wounds himself.

While dressing a severe head wound of a fellow soldier, Ingram would be shot for a fourth time. Physically weak, and severely wounded, young Ingram was pulled from the lines, only to refuse evacuation, as he felt others needed to go first.

Ingram’s vital signs weakened, and he was believed to have been killed in action. While eleven members of Company C were to die that day, Ingram survived. He and fifty-three others were wounded.

Other members of Company C were recognized for bravery that day, but for some unknown reason, the actions of Corpsman Ingram were not. His fellow soldiers did not forget him, however. Ingram was to survive the war and after a 1995 reunion, his fellow soldiers took up the fight to have his actions acknowledged.

The Vietnam War is extremely complicated and controversial to this day. One of the best sources for those interested in this war, containing articles written by those who served alongside recognized historians is VIETNAM MAGAZINE. A subscription is highly recommended.

For a full listing of Florida registered Medal of Honor recipients please see my listing HERE.

Ingram’s Medal of Honor citation can be read below.

For conspicuous gallantry and intrepidity at the risk of his life above and beyond the call of duty while serving as Corpsman with Company C, First Battalion, Seventh Marines against elements of a North Vietnam Aggressor (NVA) battalion in Quang Ngai Province Republic of Vietnam on 28 March 1966. Petty Officer Ingram accompanied the point platoon as it aggressively dispatched an outpost of an NVA battalion. The momentum of the attack rolled off a ridge line down a tree covered slope to a small paddy and a village beyond. Suddenly, the village tree line exploded with an intense hail of automatic rifle fire from approximately 100 North Vietnamese regulars. In mere moments, the platoon ranks were decimated. Oblivious to the danger, Petty Officer Ingram crawled across the bullet spattered terrain to reach a downed Marine. As he administered aid, a bullet went through the palm of his hand. Calls for “CORPSMAN” echoed across the ridge. Bleeding, he edged across the fire swept landscape, collecting ammunition from the dead and administering aid to the wounded. Receiving two more wounds before realizing the third wound was life-threatening, he looked for a way off the face of the ridge, but again he heard the call for corpsman and again, he resolutely answered. Though severely wounded three times, he rendered aid to those incapable until he finally reached the right flank of the platoon. While dressing the head wound of another corpsman, he sustained his fourth bullet wound. From sixteen hundred hours until just prior to sunset, Petty Officer Ingram pushed, pulled, cajoled, and doctored his Marines. Enduring the pain from his many wounds and disregarding the probability of his demise, Petty Officer Ingram’s intrepid actions saved many lives that day. By his indomitable fighting spirit, daring initiative, and unfaltering dedications to duty, Petty Officer Ingram reflected great credit upon himself and upheld the highest traditions of the United States Naval Service.

Eight veterans from the war in Afghanistan have been awarded our nation’s highest honor for valor in combat since the publication of the third edition of Medal of Honor, including Edward C. Byers, Jr., the newest living recipient and a member of Navy SEAL Team Six, and Clint Romesha, author of the New York Times bestselling Red Platoon. And nearly 50 years after their service, four Vietnam veterans have also since received the recognition they so richly deserve. Now these men rightly take their place in the pages of this revised and updated edition.

Included here are 156 Medal of Honor recipients, captured with a contemporary portrait by award-winning photographer Nick Del Calzo and profiled in moving text by National Book Award nominee Peter Collier. The men in the book fought in conflicts from World War II to Afghanistan, served in every branch of the armed services, and represent a cross section as diverse as America itself. This is their ultimate record.

The Congressional Medal of Honor Society website is also a recommended source.

Staff Sergeant William Lee Owen Brown was killed on February 10, 1968 when the C-130 aircraft he was a passenger on was hit by enemy fire as they approached the Khe Sanh airfield. The damaged plane was able to land but did not stop safely, running off the end of the runway, exploding in flames. Five of the ten passengers escaped the burning wreckage and received treatment at the US Army hospital.

Brown was born January 20, 1934 in DeLand, FL where he attended public schools. Brown  joined the Marine Corps in June 1953. He attended military photography schools at Fort Monmouth, NJ and Tokyo, Japan. His many USMC roles included that of recruiter, a drill instructor at Parris Island, NC, and at the time of his death, he served as a non-commissioned officer in charge of the First Marine Air Wing Photo Lab.

During his career Sergeant Brown was awarded multiple decorations including the Good Conduct Medal, the National Defense Ribbon, was a six-time recipient of Expert Rifleman awards, the Navy Commendation Medal with Combat (V), Air Medal and Combat Aircrew Insignia with three stars.

At the time of his death, his wife Pauline (Kerr), son Hugh William, and daughter Karen Denise,

Sergeant Brown was survived by his wife Pauline (Kerr), son Hugh William, and daughter Karen Denise, all of whom lived in Albany, New York. His mother Emma Lee Brown lived in DeLand. He was predeceased by his father, Robert Owen Brown.

Sergeant Brown is buried in Oakdale Cemetery, in DeLand, FL.

To better understand the controversial and complex intricacies of the Vietnam War, I recommend a  subscription to the bi-monthly VIETNAM MAGAZINE.

If you are interested in war time death, military burials located in Oakdale Cemetery, I invite you to read my blog post about Sergeant Adam Quinn, who perished while serving in Afghanistan. To keep up with the latest scholarship on the Vietnam War, I invite you to consider a  subscription to Vietnam magazine . Click the photo or the link for exclusive subscription savings and your first issue will be in your mailbox soon. 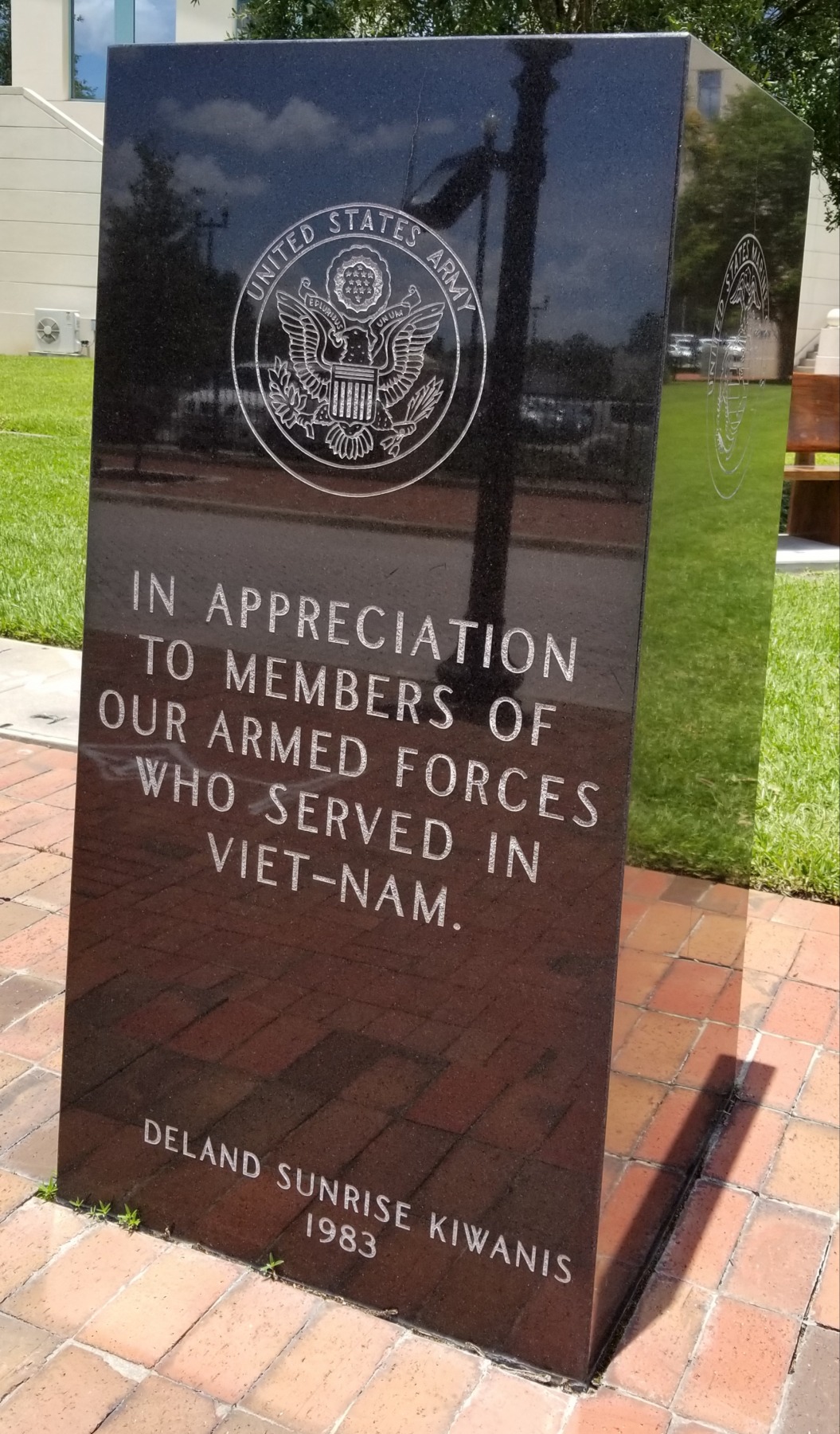 It was more than ten years after the war in Vietnam ended that a monument was unveiled on Veterans Day, 1983

to a crowd of more than 200 in downtown DeLand, Florida honoring the service of all who served during the Vietnam War. While not specifically dedicated to local service members, “this monument is dedicated to those people who made their individual sacrifices. That’s what this ceremony is all about. Not just to the killed in action and the missing in action, but to all the Vietnam vets” were the words spoken by John Allen, who spearheaded the monument committee for the Sunrise Kiwanis Club of DeLand.

The beautiful African black granite monument weighs 3,600 pounds. The Kiwanis raised over $5,000 in order to fund the project. The monument is inscribed; “In appreciation to members of our armed forces who served in Viet-Nam.” Four service branch emblems are engraved on each side and the DeLand Sunshine Kiwanis name and 1983 is inscribed at the bottom.

The keynote speaker for the event was Major General Maurice O. Edmonds. At the time of the event, Major General Edmonds was serving as Deputy Chief of Staff of Training at the U.S. Army Training and Doctrine Command. General Edmonds discussed the importance of duty, stating, “The same call to duty to the nation demonstrated by our forefathers still exists in the young generation of Americans today.”

Major General Edmonds had a long and distinguished career with awards and decorations including the Silver Star, the Defense Superior Medal, Legion of Merit, Bronze Star with four oak leaf clusters, Meritorious Service Medal, amongst others.

The monument is located on Indiana Avenue adjacent to the Thomas C. Kelly Administration Building, 123 W. Indiana. Indiana Avenue features one-way traffic and there is parking on both sides of the street. There are also parking lots located within easy walking distance of the monument.

Disclaimer: This post may contain affiliate links. If you click on these links and make a purchase I may receive a small commission fee. This does not impact your purchase price. Affiliate fees help defray costs of this website.