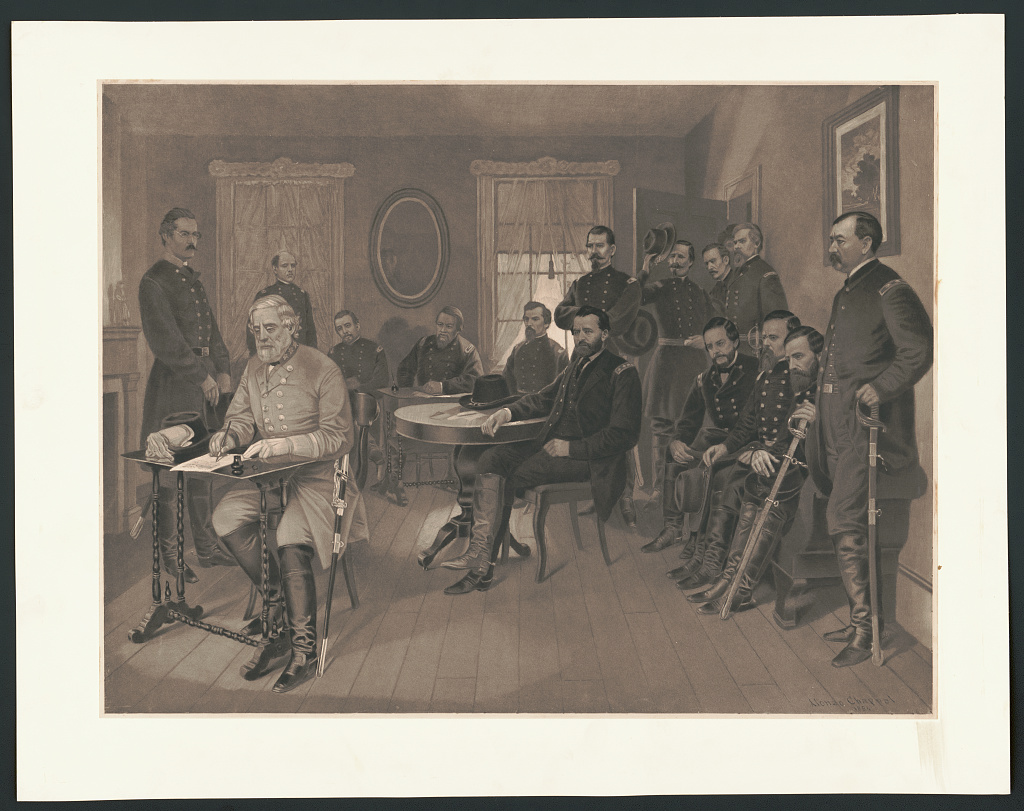 The first document text below is of the original draft of the surrender terms given to Lee for review by Grant on the 9th of April, 1865. In this draft Lee added the word “exchanged” after “properly,” which Grant had left out.

In accordance with the substance of my letter to you of the 8th instant, I propose to receive the surrender of the Army of N. Va. on the following terms; to wit:

Rolls of all the officers and men to be made in duplicate one copy to be given to an officer designated by me, the other to be retained by such officer or officers as you may designate. The officers to give their individual paroles not to take up arms against the Government of the United States until properly exchanged and each company or regimental commander sign a like parole for the men of their commands.

The arms, artillery, and public property are to be parked and stacked and turned over to the officer appointed by me to receive them. This will not embrace the side arms of the officers, nor their private horses or baggage. This done officers and man will be allowed to return to their homes not to be disturbed by United States authority so long as they observe their parole and the laws in force where they may reside.

This is the final version of a letter written by Lieutenant Colonel Charles Marshall for Lee. This is Lee’s acceptance letter to Grant’s terms of surrender.

I have received your letter of this date containing the terms of surrender of the Army of Northern Virginia as proposed by you. As they are substantially the same as those expressed in your letter of the 8th instant, they are accepted. I will proceed to designate the proper officers to carry the stipulations into effect.

General Order #9 is Lee’s farewell order given to his soldiers.

After four years of arduous service marked by unsurpassed courage and fortitude, the Army of Northern Virginia has been compelled to yield to overwhelming numbers and resources.

I need not tell the brave survivors of so many hard fought battles, who have remained steadfast to the last,that I have consented to this result from no distrust of them.

But feeling that valor and devotion could accomplish nothing that would compensate for the loss that must have attended the continuance of the contest, I determined to avoid the useless sacrifice of those whose past services have endeared them to their countrymen.

By the terms of the agreement officers and men can return to their homes and remain until exchanged. You will take with you the satisfaction that proceeds from the consciousness of duty faithfully performed, and I earnestly pray that a merciful God will extend to you His blessing and protection.

With an increasing admiration of your constancy and devotion to your country, and a grateful remembrance of your kind and generous considerations for myself, I bid you all an affectionate farewell.

For further reading on the final days of the war and the surrender of the Army of Northern Virginia I recommend the following books:

Appomattox: Victory, Defeat, and Freedom at the End of the Civil War written by Elizabeth R. Varon

In Appomattox, Varon deftly captures the events swirling around that well remembered-but not well understood-moment when the Civil War ended. She expertly depicts the final battles in Virginia, when Grant’s troops surrounded Lee’s half-starved army, the meeting of the generals at the McLean House, and the shocked reaction as news of the surrender spread like an electric charge throughout the nation. But as Varon shows, the ink had hardly dried before both sides launched a bitter debate over the meaning of the war and the nation’s future. For Grant, and for most in the North, the Union victory was one of right over wrong, a vindication of free society; for many African Americans, the surrender marked the dawn of freedom itself. Lee, in contrast, believed that the Union victory was one of might over right: the vast impersonal Northern war machine had worn down a valorous and unbowed South. Lee was committed to peace, but committed, too, to the restoration of the South’s political power within the Union and the perpetuation of white supremacy. These two competing visions of the war’s end paved the way not only for Southern resistance to reconstruction but also our ongoing debates on the Civil War, 150 years later.

A Stillness at Appomattox (Army of the Potomac, Vol. 3) written by Bruce Catton

In this final volume of the Army of the Potomac Trilogy, Catton, America’s foremost Civil War historian, takes the reader through the battles of the Wilderness, the Bloody Angle, Cold Harbot, the Crater, and on through the horrible months to one moment at Appomattox. Grant, Meade, Sheridan, and Lee vividly come to life in all their failings and triumphs. 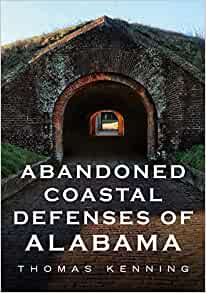 Thank you to Arcadia Publishing for providing review copies of the two following books. Look reviews in the future.

Abandoned Coastal Defenses of Alabama is a down-and-dirty guided tour through Fort Morgan and Fort Gaines, the retired guardians of Alabama’s Gulf Coast. For nearly two hundred years, these hauntingly beautiful Third System forts have stood stubbornly between the Yellowhammer State and a sometimes hostile world beyond.

Have you ever driven past a dilapidated old building, with broken windows and covered in ivy, and wondered what happened there? How long has that building been vacant and left to be consumed by nature? This book takes you on a photo tour of such buildings in Virginia, all forgotten and falling apart. There is an Art Deco city skyscraper, which formerly held a bank, complete with a bank vault. Another property contains a sprawling complex of a former Catholic high school. Additional locations include houses, schools, commercial warehouses, and even a former outdoor Renaissance Faire.

Sometimes there is available information about how these buildings became abandoned. In other cases, the story is a complete mystery. Regardless of the details, there is something intriguing about seeing a structure that has slowly decayed, a once pristine place being transformed into broken glass and crumbling ceiling tiles. The people are long gone, but you can still see what remains of something they have left behind, just waiting to be discovered with a camera.