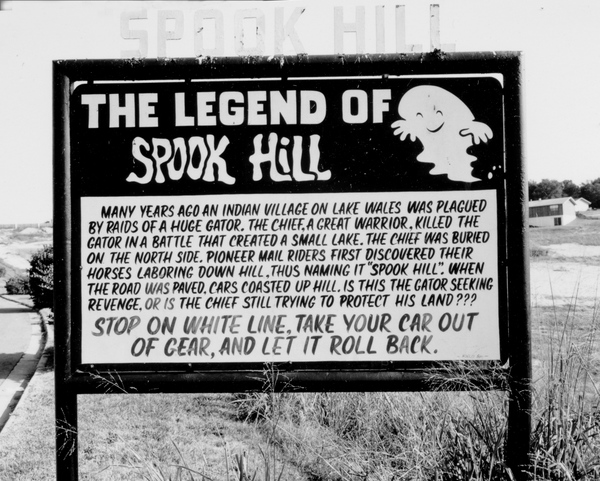 An old black and white image, complete with a mischievously smiling ghost,
announces Spook Hill to drivers with the following improbable legend.

Many years ago an Indian village on Lake Wales was plagued by raids of a huge gator. The chief, a great warrior, killed the gator in a battle that created a small lake. This chief was buried on the north side. Pioneer mail riders first discovered their horses laboring down the hill, thus naming it “Spook Hill.” When the road was paved, cars coasted up hill. Is this the gator seeking revenge, or is the chief still trying to protect his land??? Stop on white line, take your car out of gear, and let it roll back.

Located in Lake Wales, Florida, a town of around 17,000 in Polk County, Spook
Hill has been confusing, astounding, and frightening visitors since at least the
1950s.

Lake Wales itself is unique in that it is built upon what is now called the Lake
Wales Ridge. This 150-mile long ridge contains some of the highest geological
spots in Florida. During the period when Florida was submerged underneath the
Atlantic Ocean, this ridge often rose above the waters as a series of islands.

In the early years of settlement, the area remained largely uninhabited. This was
due to the difficulties in reaching the area. The elevation, along with a lack of
roads and railroads, allowed the area to remain immune to the development
occurring along the coastlines. The area was prime for human habitation however.
Wide-open lands were perfect for agriculture and cattle while abundant forests
provided timber and turpentine.

In 1879, a surveyor by the name of Sidney Irving Wailes, named a small lake in
the area Lake Wailes. By 1911, the economic potential of the land was better
understood and the Lake Wales Land Company was founded by a group of four
businessmen.

Changing the name from Wailes to Wales, these men set out to establish a lakeside
community that would develop from exploiting the lands. By 1912, the turpentine
industry was rapidly growing and the developers worked to create infrastructure
around the fledgling operation. A school and the Hotel Wales were soon
constructed helping attract visitors and permanent residents.

In less than a decade, the Lake Wales area was unrecognizable to those who might
have seen the area at the turn of the century. The citrus industry exploded,
providing jobs for many and wealth to a few. Attractions such as Bok Tower
Gardens helped attract tourists.

Bok Tower Gardens is named for Pulitzer Prize winning author Edward William
Bok. Bok was editor of Ladies Home Journal and was a leader in promoting social
causes while also championing the Arts and Crafts style of architecture. Opened to
much fanfare in 1929 by Calvin Coolidge, Bok Gardens proved popular with the
Tin Can Tourists of the day.

Today, the property located at the highest elevation in Florida, encompasses more
than 130 acres. The primary attractions are the Frederick Law Olmsted, Jr.
designed gardens and the singing tower, designed by architect Milton B. Medary.
Admission to the park is less than $20 for those ages 5+. Admission to El Retiro, a
twenty room home, 1930s Mediterranean style mansion that was acquired by the
Bok Tower Foundation in 1970 requires a separate admission fee. The Gardens
were added to the National Register of Historic Places in 1973 and El Retiro was
added in 1985.

Want to learn more about the beautiful area of Lake Wales? Take a look at this book from the Arcadia Publishing, Images of American series.

As might be expected, there are numerous legends regarding Spook Hill in addition to the gator fighting Indian chief. Many years ago, the local restaurant Barney’s Tavern published a leaflet claiming to tell the “real” story of Spook Hill. Barney’s claimed that pirate with the clever name of Captain Gimme Sarsparilla retired to Lake Wales. Pirate Teniente Vanilla joined the Captain upon his retirement.

The real reason behind Spook Hill

The true explanation is much less fanciful and quite a bit more boring. According to the National Register of Historic Places application for Spook Hill, this is what is known as a gravity hill optical illusion. Here, the southern end of the site is at the start of a shallow upwards incline along North Wales Drive. The incline becomes steeper moving toward Burns Avenue. The transition point from shallow to steep is marked as the starting point. Here, while facing north on the one-way street, a driver is to put their car into neutral, and slowly roll backwards downhill while they feel as if they are being pulled uphill. The illusion is caused by the geography of the area. The view of the horizon is blocked by the higher hill.

Lake Wales is not unique in having a Spook Hill. Other similar locations have been
documented such as Confusion Hill in Pennsylvania; Gravity Hill in Maryland; and
Mystery Spot in Michigan.

If you have ever visited Spook Hill, please leave a comment and let me know what you thought.

Want a Spook Hill postcard of your own? Check out these options on ebay!