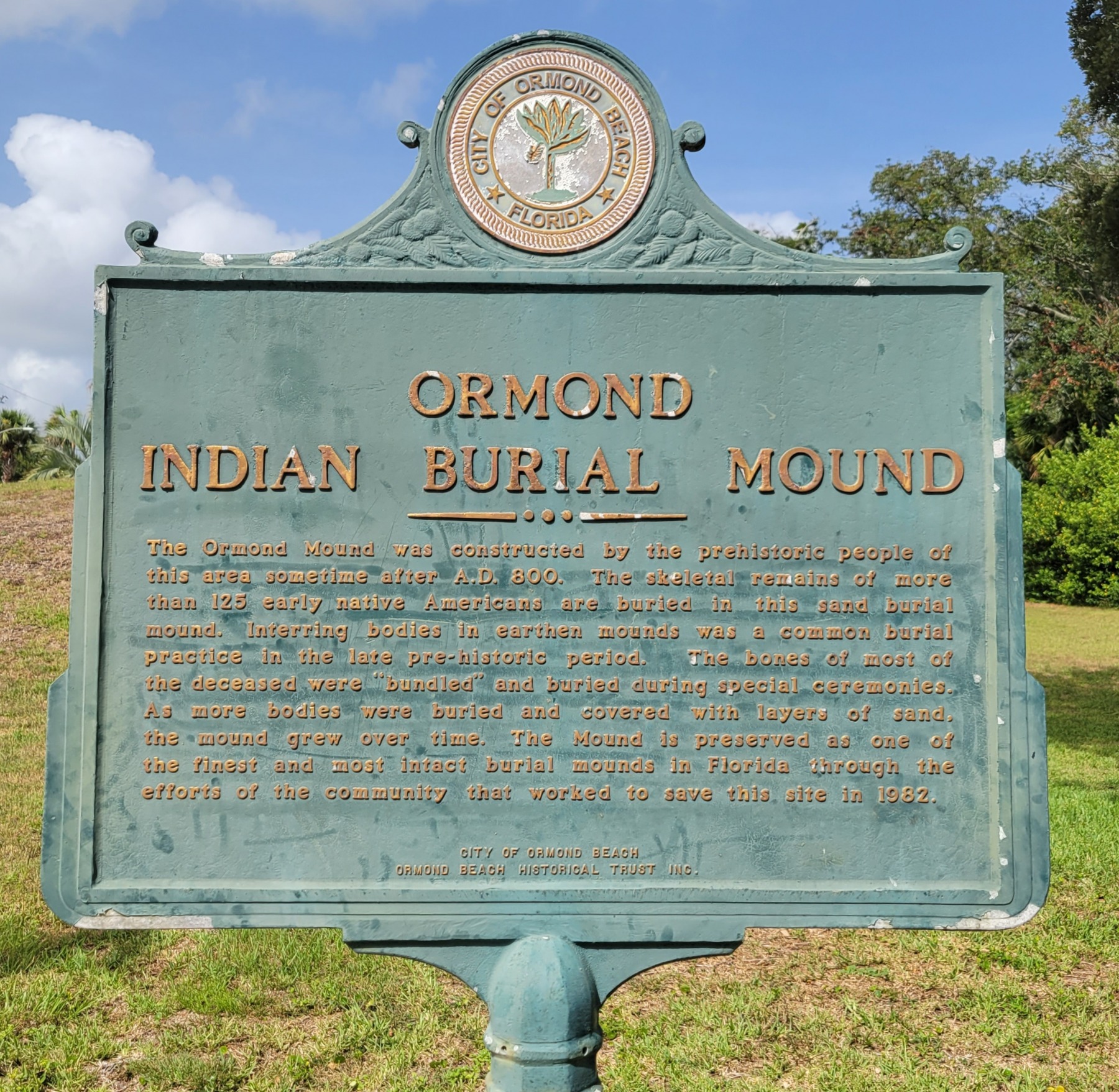 In May 1982, when Dixon H. Reeves, and his wife Harriett, paid contractors to break ground on a house site at the corner of south Beach Street and Mound Avenue in Ormond Beach, they did not fully comprehend the damage they were going to do to an irreplaceable cultural artifact. In fact, once the city manager issued a stop work order, the Reeves sued the city for damages. The property ownership reverted to Mr. and Mrs. Melvin Barron, who the Reeves purchased the property from, and the Reeves eventually received a $4,000 settlement from the city.

Where the Reeves wish to build their home was the site of a Timucuan Burial Mound. In Timucuan society, bodies were not buried but instead they were placed on top of the ground and dirt piled on top. In some instances, the flesh was allowed to decay, and the bones were bundled and placed at the mound site. At times, items owned by the deceased were broken and included in the interment.

Despite the mound having received considerable damage through the years, including digging by “pot hunters” and construction of adjacent roadways, archaeologists believe as many as 125 Timucuans had been buried on the site. For anybody caught digging on this, or similar sites, you will more likely than not be charged with a third-degree felony. See this link for additional information.

With a lack of consensus among city leaders a fund was started to help purchase and preserve this sacred site. The Barron’s agreed to sell the property to the city for $55,000. Despite confirmation on the importance of the site from professional anthropologists and archaeologists, it took an anonymous donation of $30,000, along with the fundraising drive, to help secure the sale as shortsighted elected city officials balked at the price and potential ongoing costs.

Today, the site is owned by the City of Ormond Beach and is a park in a residential area. Visitors can see the mound from all sides, surrounded by roads and houses. Parking is available across the street at Ames Park so please do not park on park lands or in the yards or drives of nearby property owners. Please do not climb on the mound as it is a fragile archaeological site.

If you are interested in Native American History and mythology, this fascinating book is one you should have in your libary. This fascinating and informative compendium of Native American lore was assembled by one of twentieth-century America’s premier ethnographer/anthropologists. Hartley Burr Alexander recounts the continent’s myths chronologically and region-by-region, offering a remarkably wide range of nomadic sagas, animist myths, cosmogonies and creation myths, end-time prophecies, and other traditional tales. Click the photo to order directly from the publisher and to see their other Native American selections.

The Ormond Mound was constructed by the prehistoric people of this area sometime after A.D. 800. The skeletal remains of more than 125 early native (sic) Americans are buried in this sand burial mound. Interring bodies in earthen mounds was a common burial practice in the late pre-historic period. The bones of most of the deceased were “bundled” and buried during special ceremonies. As more bodies were buried and covered with layers of sand, the mound grew over time. The Mound is preserved as one of the finest and most intact burial mounds in Florida through the efforts of the community that worked to save this site in 1982.

This marker is placed by the City of Ormond Beach and is not a part of the Florida Department of State marker program.

If you wish to learn more about Timucuan culture there is an excellent book I can recommend.

Perhaps the definitive book on the subject is written by Dr. Jerald Milanich, The Timucua.

This is the story of the Timucua, an American Indian people who thrived for centuries in the southeast portion of what is now the United States of America.

Timucua groups lived in Northern Florida and Southern Georgia, a region occupied by native people for thirteen millennia. They were among the first of the American Indians to come in contact with Europeans, when the Spaniard Juan Ponce de Leon landed on the Florida coast in 1513. Thousands of archaeological sites, village middens and sand and shell mounds still dot the landscape, offering mute testimony to the former presence of the Timucua and their ancestors.

Two hundred and fifty years after Ponce de Leon’s voyage the Timucua had disappeared, extinguished by the ravages of colonialism. Who were the Timucua? Where did they come from? How did they live? What caused their extinction? These are questions this book attempts to answer, using information gathered from archaeological excavations and from the interpretation of historical documents left behind by the European powers, mainly Spain and France, who sought to colonize Florida and to place the Timucua under their sway.

I also recommend taking a look at this page from the National Park Service.

Great magazines at low prices for students & educators. Click to save up to 90% off the cover price.

The State Library and Archives of Florida (Florida Memory), has an excellent page of Theodor de Bry’s Engravings of the Timucua. These incredible works of art date from before the year 1600. The 42 pieces are all available for viewing and low resolution copies are available for download. A sample de Bry image is seen at the left. 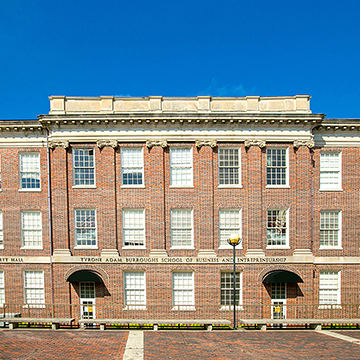 “HBCUs have been an important part of the American education system for more than 180 years, providing high-level academics, opportunities, and community for generations of students,” said NPS Deputy Director Shawn Benge. “The National Park Service’s Historically Black Colleges and Universities Grant Program provides assistance to preserve noteworthy structures that honor the past and tell the ongoing  story of these historic institutions.”

Since 1995, the NPS has awarded $77.6 million in grants to 66 HBCUs. Congress appropriates funding for the program through the Historic Preservation Fund (HPF). The HPF uses revenue from federal oil leases on the Outer Continental Shelf to provide assistance for a broad range of preservation projects without expending tax dollars.

Projects funded by these grants will support the physical preservation of National
Register listed sites on HBCU campuses to include historic districts, buildings, sites,
structures, and objects. Eligible costs include pre-preservation studies, architectural
plans and specifications, historic structure reports, and the repair and rehabilitation of
historic properties according to the Secretary of the Interior’s Standards for the
Treatment of Historic Properties.

This years’ grants will fund projects including a window restoration project for
Centennial Hall at Edward Waters College in Jacksonville, FL, the restoration of pews
and stained-glass windows for the Antisdel Chapel at Benedict College in Columbia,
SC, and the stabilization of Hermitage Hall for future rehabilitation at St. Augustine’s
University in Raleigh, NC.

For more information about the grants and the Historically Black Colleges and
Universities program, please visit http://go.nps.gov/hbcu. Applications for another $10
million in funding will be available in the winter of 2021. 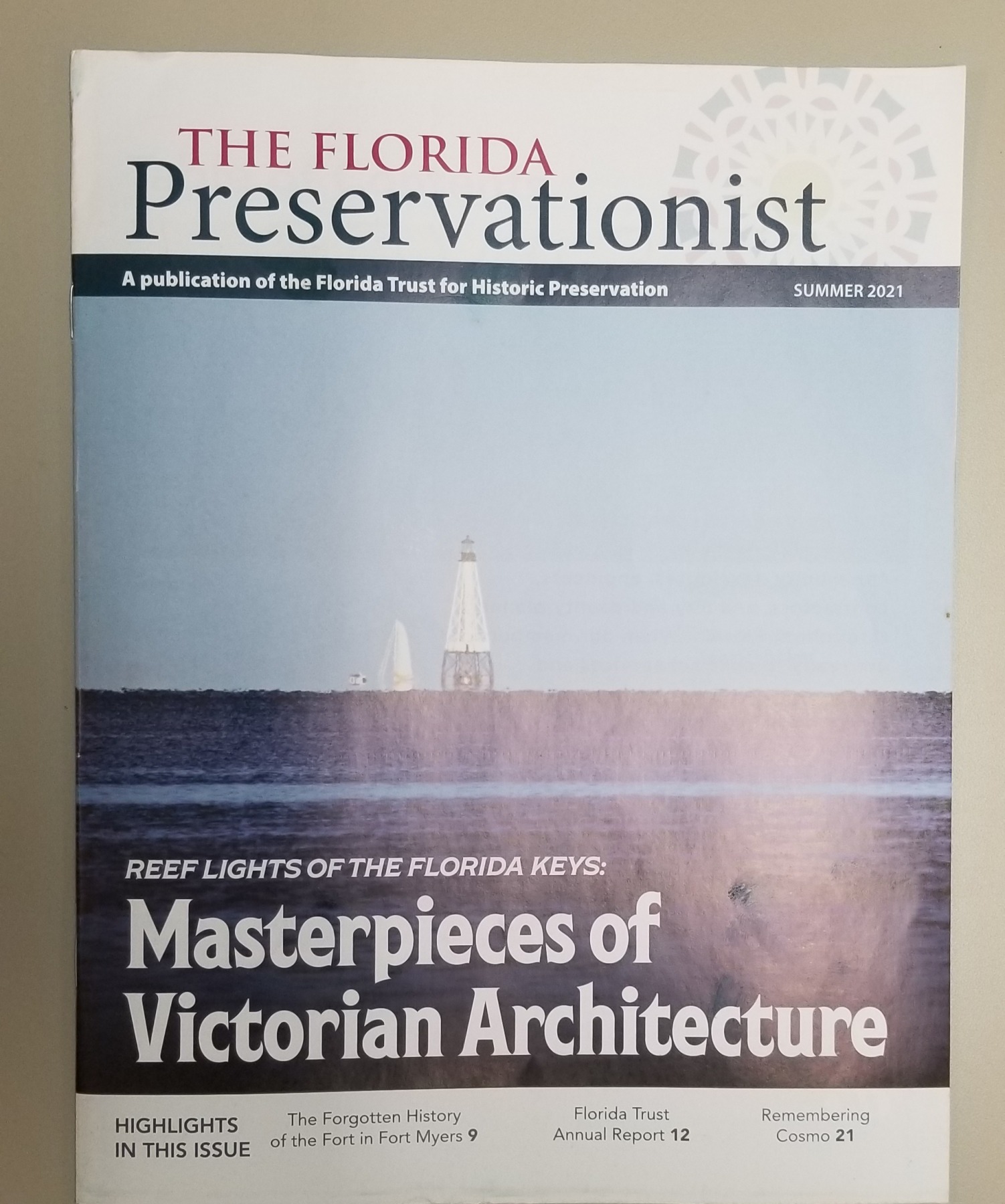 There are several interesting articles this quarter including an update on renovation work being done at the Lummus Park Cottage in Miami. If you are interested in the Seminole Wars you will want to read the article Billy Bowlegs and the Cow Cavalry: The Fogotten History of the Fort in Fort Meyers.

There are plenty of lighthouse aficionados out there and the article Reef Lights of the Florida Keys: Masterpieces of Victorian Architecture is for them. The settlement of Cosmo, located in Jacksonville receives a short write up before the issue ends with the article Tactical Preservation: Wood Rot in Historic Buildings.

This is not a scholarly journal; the articles are very short and not footnoted. The brief articles are interesting to read and appropriate for entry-level preservationists. I look at this as just a benefit for being a member of the organization.