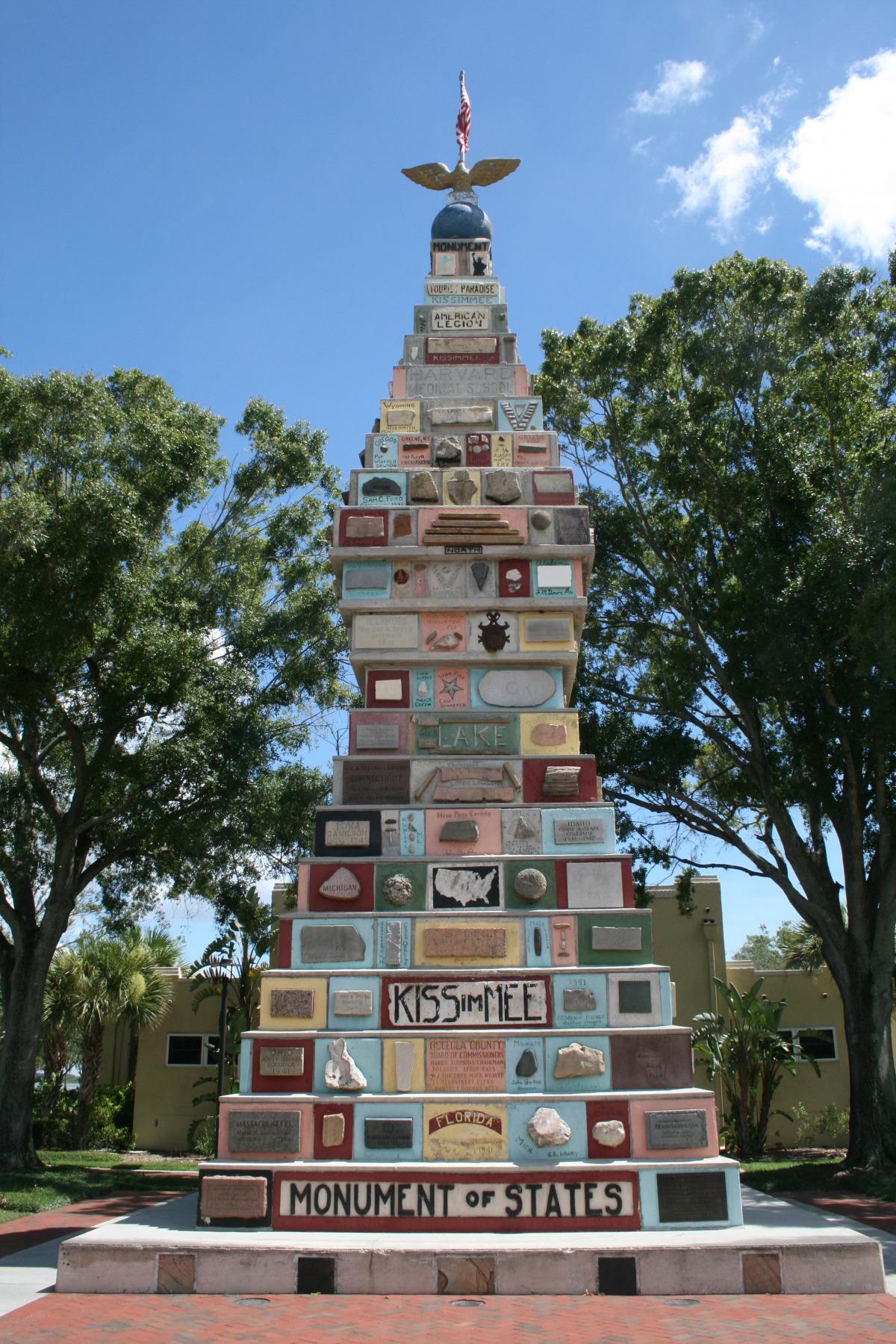 Located just south of downtown Kissimmee, near the intersection of Lakeview Drive and Monument Avenue visitors will find the Monument of States.

The Monument of States was the brainchild of Dr. Charles W. Bressler-Pettis. As Joy Dickinson has written about Bressler-Pettis, “…one Central Floridian was galvanized to express the nation’s unity in a singular, towering vision: a monument in his winter home, Kissimmee, that would express the bond between states and continue to inspire tourists to stop, look up and wonder.” (Patriotism)

The Monument of States as it currently stands has several origin stories. Some claim it dates back to 1935 (Doctors Love) while most state that it was conceived in response to the Japanese bombing of Pearl Harbor in 1941. (National Register, Patriotism)

Dr. Charles W.  Bressler-Pettis was an active member of the Lions Club and Kissimmee All-States Tourist Club and in the early 1940s partnered with J. C. Fisher to design a monument as a symbol of American unity in a time of war.

To learn more about the war that inspired this incredibly unique and beautiful monument, I recommend a subscription to World War II magazine. World War II magazine covers every aspect of history’s greatest modern conflict with vivid, revealing, and evocative writing from top historians and journalists

Promotion for the monument began immediately. By the end of December 1941, an Honor Role of Cement Donors had been established. Here, individuals and businesses who supplied a bag of concrete were thanked for their contribution. A pamphlet was produced listing 507 concrete donors.  (National Register)

Groundbreaking occurred on January 11, 1942 with the cornerstone being set in place. Volunteer labor, much of it coming from the Kissimmee All States Tourist Club, kept the project in motion. Bressler-Pettis collected rocks from donors across the country for use in the monument. Bressler-Pettis also supplied many rocks from his own travels.  He wrote letters to state governors asking for representative rocks. President Franklin D. Roosevelt contributed a stone from his Hyde Park, New York residence.

Once complete, the monument consisted of more than 1,500 stones from the then 48 states and 21 countries. It contained 21 tiers and reached 50 feet tall. The eagle atop the monument has a wingspan of six-feet. The base of the monument measures sixteen square feet and the top tier is only  two and one half square feet. The foundation for the monument is three feet thick, twenty-two square feet, and weighs approximately 100,000 pounds. (National Register, Patriotism)

The Monument of States represents a time in Florida tourism before the onslaught of theme parks and mass commercialization. The effort to create this monument brought together a community toward a common goal in a way that cartoon characters and comic book heroes never will.

For those interested in the significance of this monument to visitors, there are seemingly dozens of different postcard images of the Monument of States. This collection of images is important first, in placing the monument in time but also in documenting its early appearance. The diversity of images and the often handwritten messages sent home, show the impact the monument had on visitors. They felt this was an image worthy of sharing with the folks “back home.” In the era before social media, postcards were a convenient way of “tagging” where you were for your friends to follow.

In the years before Disney, those days of the road trip, Stuckey’s, “are we there yet,” and the roadside attraction, the Monument of States served as a tourist draw. In describing the monument and it’s relevance, the National Register of Historic Places Registration Form states, “It retains integrity of design, materials, workmanship, feeling and association with the early history and tourism efforts in Kissimmee, and continues to serve as a draw for both residents and visitors alike.” (National Register) The monument was officially added to the National Register of Historic Places in December 2015.

Just who was Dr. Bressler-Pettis? Charles was born on February 12, 1889 in Grant City, Missouri to parents Manuel and Nellie A. Bressler. When or why Charles changed his surname to Bressler-Pettis is unknown. We do know that Pettis was his mother’s maiden name. The first known recorded use of this new name is on a 1922 passport application. (Osceola History)

Young Charles was encouraged to become a medical doctor. At the urging of his family, after graduating from the University of Missouri he attended Harvard Medical School, graduating in 1917 and served his internship in Boston.

During World War I Charles served in the British army medical corps before joining the United States army medical corps later in the fight. During the war Charles visited a wealthy uncle who was living in Nice, France at the time. After the war he returned to France where he became the personal physician for his uncle. Charles was to receive a large, lifetime income from the estate of his uncle.

After returning to the States, Charles met, and married, Laura Mead. After their January 1927 wedding they embarked on a long honeymoon, logging over 78,000 miles by automobile.

Charles suffered a fatal heart attack while already in the hospital, on May 12, 1954. It is often repeated that Bressler-Pettis’s ashes are buried at the Monument of States. There is some truth to this story. After Charles’s death, his wife made request of the Kissimmee City Commission to be allowed to inter Charles’ ashes at the base of the Monument of States; a request that was approved by special ordinance.  It appears however that Mrs. Bressler-Pettis may have reconsidered. The website, Findagrave, shows a listing for Charles W. Bressler-Pettis in Grant City Cemetery, in Grant City, Missouri, the city where Charles was born. (Findagrave, Osceola History) Both stories are true. I have found reference that part of his ashes were buried in each location. This seems like a reasonable answer based upon the City Commission going to the trouble of amending local ordinances. (Memorialogy, National Register) Keep up with some the best short form writing on World War II with a subscription to the bi-monthly magazine World War II click the link or the photo to the left for exclusive savings and have it delivered right to your door. 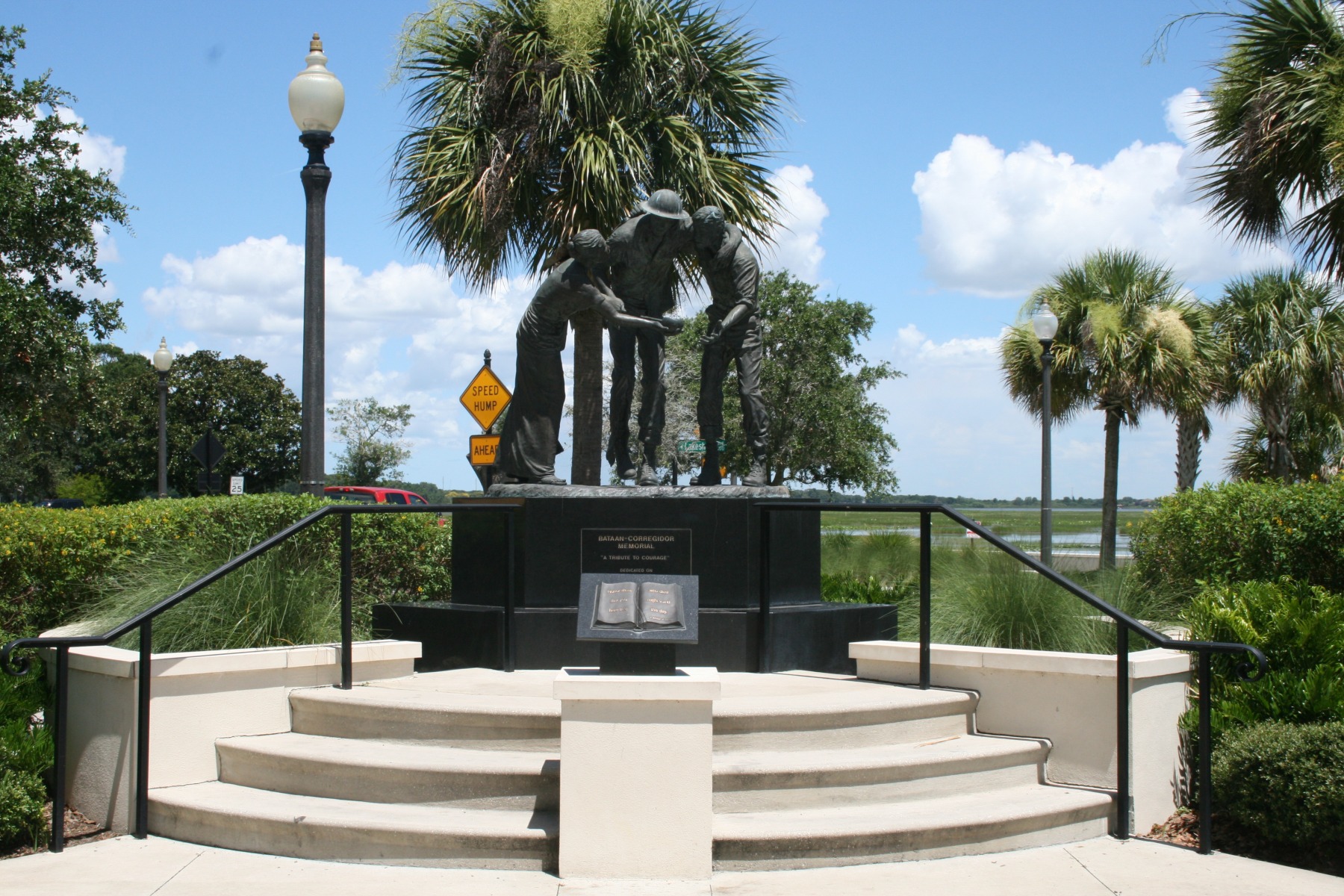 The fall of Bataan and Corregidor in the Philippine islands to Japanese forces were arguably the
worst defeats of United States forces during World War II.

In VERY simplified form, General Douglas MacArthur and his troops in the Philippines were tasked with holding back the advancing Japanese Imperial Army. Their objective was to keep Japan out of the American territory of the Philippine Islands.

General MacArthur consolidated his troops on the Bataan Peninsula where a combined force of American and Filipino troops were able to hold back the onslaught of Japanese troops for three months, a crucial delay to the plans of Japanese leadership.

After escaping Corregidor during the night of March 12, 1942, General MacArthur later uttered his famous “I Shall Return” speech, a promise he made good on in 1944.

On April 9, 1942, Bataan fell. Major General Edward P. King surrendered the allied troops to Major General Kameichiro Nagano, beginning what would become a further nightmare for the already hungry and weary troops. The surrender of Bataan would lead to the surrender of Corregidor less than a month later.

It was at this point, where Japanese soldiers ordered their prisoners into a series of marches that collectively are known as the Bataan Death March. This march was approximately 65 miles with little to no food and water.

Fast forward to the 1990s in the city of Kissimmee, FL. In 1991, the city approved the project and dedicated a quarter acre plot at Monument Avenue and Lakeshore Boulevard for the erection of a memorial honoring those who served in the Philippines during World War II. The men who spearheaded the project were former Kissimmee City Commissioner Richard Herring and resident Menandro de Mesa who founded the Bataan-Corregidor Memorial Foundation. The Foundation set a goal of raising the roughly $125,000 needed for the creation and installation of the monument. The Osceola County Tourist Development Council contributed $10,000 toward the goal.

Sculptor Sandra Mueller Storm received the commission to create the haunting memorial. Storm is a renowned artist with multiple large commissions to her credit including “The Courage to Challenge” in Vierra, FL, “Called to Serve” in Hillsboro, KS, and “Melody of Arts” in Panama City, FL. Her work is featured in major collections throughout the country. In discussing her work she stated, “I think my major strength as a sculptor is the intensity of my involvement in what I create in bronze and the emotional impact my sculptures have on those who view them. Teaching sculpture for many years has also showed me how art can change lives, especially of children and the elderly.”

On Saturday, May 20, 1995, a day in which Florida spring rains would not hold off, the city unveiled the life sized bronze statue to a crowd of several hundred. The program included a wreath laying, and keynote speeches from Philippine Brigadier General Tagumpay Nanadiego and retired United States General Bruce Holloway.

The statue features three figures huddled together showing the pain and desperation of the march. The scene depicts a Filipina woman offering care and water to two soldiers, one Filipino and the other American.

The text of the dedication plaque reads:

This monument is dedicated to the Americans and Filipinos who served in defense of democracy in the Philippines during World War II, especially in Bataan and Corregidor and on the infamous death march.

Photos of the monument

For those wanting to learn more about the Philippines in World War II there are many excellent resources to consider. I recommend taking a look at these four titles.

Every student of World War II should subscribe to World War II. Written by experts and beautifully illustrated you will save each issue. Click the photo or the link to receive exclusive savings offers on this title and hundreds more. Your first issue will be in your mailbox before you know it.