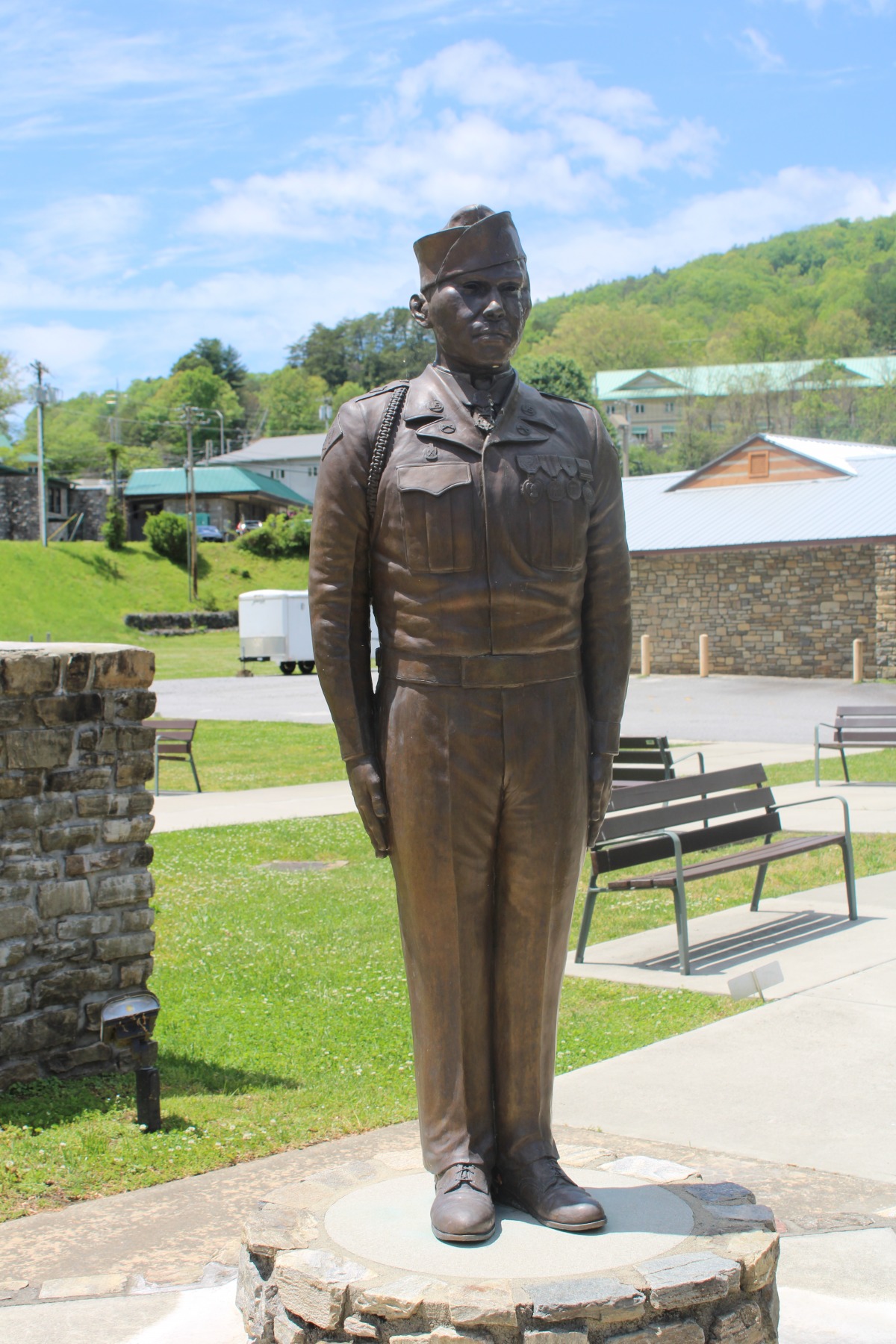 Tsali “Charles” George was born August 23, 1932 in Cherokee, North Carolina as a member of
the Eastern Band of the Cherokee Tribe. Charlie, as he was known, attended the Indian School
on the Qualla Boundary of Western North Carolina and spent much of his early life near the
Oconaluftee River.

At age 18, with the Korean War in full force, Charlie joined the United States Army in  Whittier, North Carolina, attaining the rank of Private First Class. He served in Company C of the 179th Infantry Regiment, 45th Infantry Division.

In November 1952, PFC George gave his life in order to protect that of fellow soldiers, Armando Ruiz and Marion Santo, who along with George were helping lead an assault to try to capture a prisoner for interrogation, just north of Seoul during the Battle of Songnae-dong. Having succeeded in their mission George, Ruiz, and Santo were ordered to provide cover as the Company retired.

The Chinese were continuing to fight and a grenade landed near the three young men. George pushed Santo away before falling on the live grenade in order to prevent injury and possible death to others. Despite his life threatening injuries George did not utter a sound. To do so would have betrayed their location to the Chinese.

Ruiz and Santo bravely carried the dying George to the nearest aid station but the wounds were too severe and the heroic young Cherokee passed. Both Armando Ruiz and Marion Santo survived the war, returning to the States and leading as normal a life as possible having witnessed the ultimate horror of war.

The body of Charles George was returned to Cherokee County where he was interred in Yellow
Hill Cemetery. You may view an online memorial to PFC George here.

PFC George’s heroics were recognized quickly and in March 1954, George’s parents were
invited to Washington D.C. in order to receive the Medal of Honor being awarded posthumously
to their son. In the following years, Charlies father, Jacob, was known to carry the Medal with
him, keeping this piece of his son close to him at all times.

The bridge crossing the Oconaluftee River in the Yellowhill Community was dedicated as the
Charles George Bridge on January 23, 2014.

On September 24, 2016, a life-sized statue of George, sculpted by artists James Spratt, was unveiled at the Charles George VA Medical Center. Center Director Cynthia Breyfogle stated, “The legacy of Charles George was, and still is, an inspiration and influence beyond his local community. His courage and example join those of other brave men and women, past and present, who have answered the call when their country needed them.”

Unfortunately, Mr. Spratt did not live to see the unveiling. He passed away the day of the unveiling while under hospice care. Warren Dupree of the American Legion Post 143 said a few words on behalf of Spratt, “…he wanted to thank the Eastern Band of Cherokee Indians and the Charles George Memorial Project Committee for their kindness in helping him make his dream come true.”

On November 11, 2016, an identical sculpture to the one located at the VA Center was unveiled in a moving ceremony at the refurbished Cherokee Veterans Park.

The Museum of the Cherokee Indian opened an exhibit in George’s honor on Memorial Day, May 28, 2018. The impressive displays included a bronze bust of George, the flag that draped his coffin, his numerous military medals including his Medal of Honor, and a copy of the text of his Medal of Honor citation. You may read this citation below.

Pfc. George, a member of Company C, distinguished himself by conspicuous gallantry and
outstanding courage above and beyond the call of duty in action against the enemy on the night
of 30 November 1952. He was a member of a raiding party committed to engage the enemy and
capture a prisoner for interrogation. Forging up the rugged slope of the key terrain feature, the
group was subjected to intense mortar and machine-gun fire and suffered several casualties.
Throughout the advance, he fought valiantly and, upon reaching the crest of the hill, leaped into
the trenches and closed with the enemy in hand-to-hand combat. When friendly troops were
ordered to move back upon completion of the assignment, he and two comrades remained to
cover the withdrawal. While in the process of leaving the trenches a hostile soldier hurled a
grenade into their midst. Pfc. George shouted a warning to one comrade, pushed the other
soldier out of danger, and, with full knowledge of the consequences, unhesitatingly threw himself
upon the grenade, absorbing the full blast of the explosion. Although seriously wounded in this
display of valor, he refrained from any outcry which would divulge the position of his
companions. The two soldiers evacuated him to the forward aid station and shortly thereafter he
succumbed to his wound. Pfc. George’s indomitable courage, consummate devotion to duty, and
willing self-sacrifice reflect the highest credit upon himself and uphold the finest traditions of the
military service.

To learn more about the Medal of Honor I recommend Medal of Honor, Revised & Updated Third Edition: Portraits of Valor Beyond the Call of Duty

To learn more about the Cherokee Indian Nation I recommend Trail of Tears: The Rise and Fall of the Cherokee Nation. 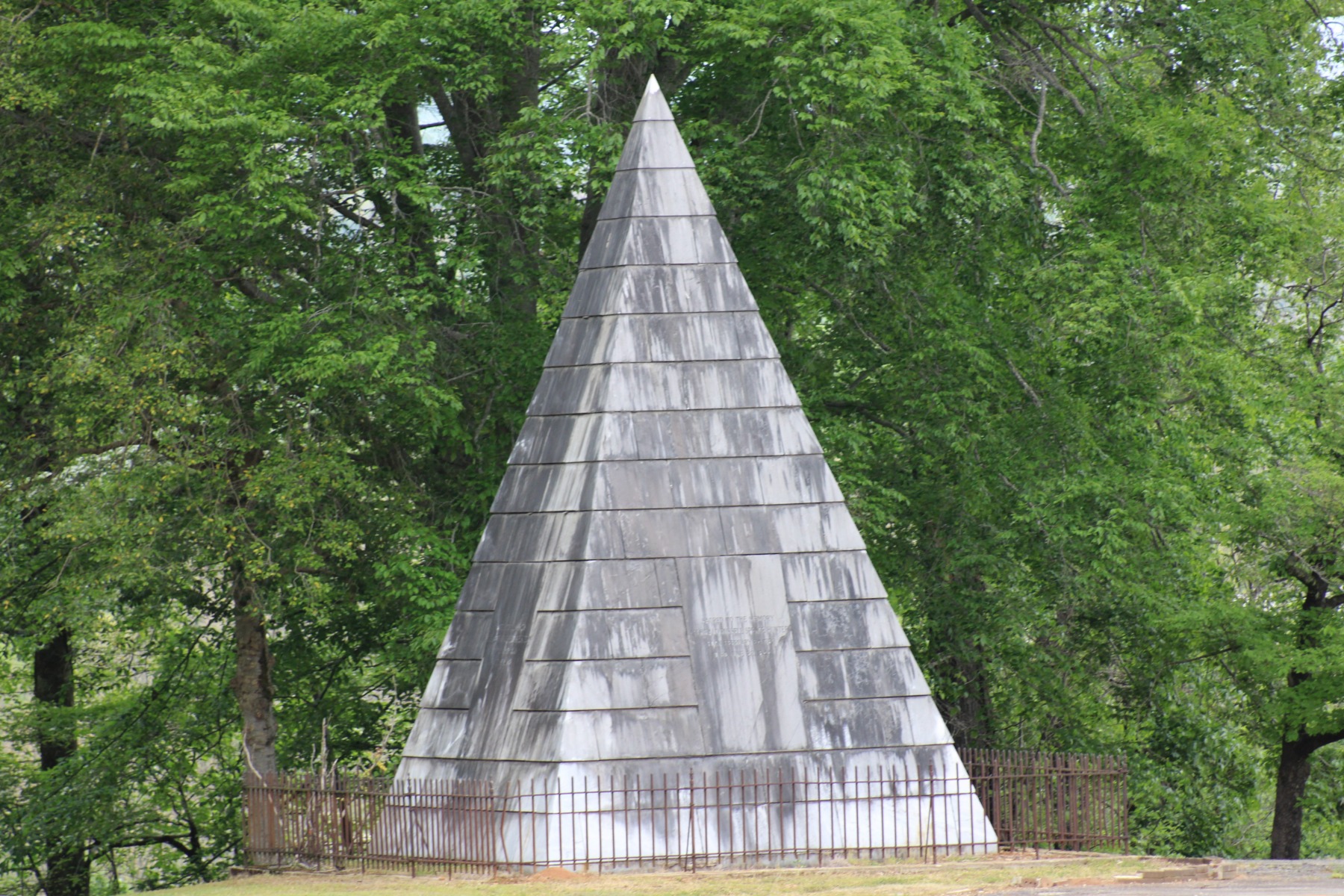 Road trips can bring you to the most interesting locations at times. That can certainly be said for the
town of Murphy, located in Cherokee County, North Carolina. Murphy sits near the far western end of
North Carolina where the Hiawassee and Valley rivers meet. The town is approximately 350 miles from
Raleigh. Cherokee County is home to just under 29,000 residents according to Census estimates.

Sometime around 1930 Hitchcock Coit (also seen in some references as Colt) erected a 25-foot-tall pyramid in honor of her grandfather, A.R.S. Hunter. A.R.S. Hunter is said to have been the first white settler in the area. He served as the first postmaster in Murphy, operated a ferry system, and created a trading post allowing Cherokees to trade with local soldiers.

Inscribed on the pyramid are the names of three individuals many locals claim are buried there. Historians question whether there are any burials on site with most believing there are none on site.

The pyramid is on private property and when we visited, there was a locked gate on the property. The
pyramid is located on 5th Avenue. You are able to see and photograph the pyramid at a distance without
trespassing.

Here you can learn about places to visit, find lodging, discover great places to eat (the outdoor dining at Murphy’s Chophouse was fantastic) and drink (I recommend Hoppy Trout Brewing Company), and view a calendar of events.